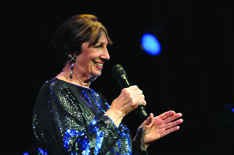 Local 9-535 (Boston, MA) member Maggie Scott has had a long career performing from the Great American Songbook and teaching it to students at Berklee College of Music.

In a career that has spanned seven decades, jazz vocalist and pianist Maggie Scott of Local 9-535 (Boston, MA) still draws inspiration from the music she grew up with, in an era when the big bands were in full swing.

Scott remembers waiting at the stage door of the RKO Theatre on Washington Street after shows for autographs of Gene Krupa, Anita O’Day, and Tex Beneke. Hearing the Tommy Dorsey band, with Frank Sinatra, was a highlight. “He was thin,” she recalls, “He sang really well—and in those days, girls swooned. I was still in high school and the fare going into Boston was 10 cents!”

The smoky piano lounges and full jazz orchestras may be long gone but Scott, who still performs at the Top of the Hub in Boston, has done her part to introduce the canon of standards to a new generation. At Berklee College of Music, where she has taught since 1978, Scott is something of a legend.

Her own story lends an illuminating dimension to the course she teaches: The Great American Songbook. She draws on her experiences to help students develop phrasing, tempos, style, and artful presentation. She is a purist who urges students to learn as many jazz standards as possible, a solid repertoire of George Gershwin, Cole Porter, Rodgers and Hart, Irving Berlin, and Johnny Mercer.

“The lyric is the song! Tell the story,” she instructs her students. “A jazz piece never requires vibrato, but straight sound always,” she says. Only when a student has mastered the song and knows it inside out can he or she improvise, change keys and tempos.

“An experienced singer starts to hear other melodies that fit the chord progression,” she says. It’s a natural process, but one Scott insists takes time. For diction, unparalleled tone, and range, she points to First Lady of Song, Ella Fitzgerald. “As a singer matures and sings them long enough, the lyrics take on new meaning,” she says, adding, “Billie Holiday, for example, her pain came through on so many of her ballads. You could just hear it.”

Vocalists who had a strong influences on her development included Peggy Lee, Julie London, Chris Connor, June Christy, and Jo Stafford. Classical training came later, in 1950, when she auditioned for Arthur Fiedler. After nearly three years of practice and a second audition, she earned a solo with the Boston Pops, playing Gershwin’s “Concerto in F.”

Scott, who in the 1970s accompanied many of the greats—Cab Calloway, Eartha Kitt, John Raitt, Tommy Tune, Toots Thielemans, and Natalie Cole—studied at the Juilliard School of Music in the late 1940s with jazz pianist John Mehegan.

She had joined the AFM in 1946, just out of high school, and was already playing piano at hotels and clubs around Boston. “I knew the best musicians belonged to the local and I aspired to play with them—and ultimately I did,” she says. “There is a certain amount of respect given a member, and playing with my peers was all part of it.”

She went on to become the first woman elected to the union’s local executive board, where she served for 31 years, from 1979 to 2010. Back in the days of crowded, smoke-filled union halls, the exchanges could become quite heated. Scott says, “I charged 25 cents for every swear word, and actually collected $11. And I bought donuts with the money!” She adds, “I also bought a ‘no smoking’ sign.”

Scott laments the loss of live venues for musicians, noting DJs have flooded the industry, competing for wedding and club engagements once reserved for casual-date players. “There has been a tremendous loss of gigs for the union musician. The jazz clubs have suffered as well,” she says.

Her job now, as she sees it, is to educate a new generation of Songbook devotees. “The lyricists were unbeatable. Students should know the music, become familiar with it because it may influence what they may want to pursue as part of their music education,” she says. Given the scores of young stars and high profile students—Lalah Hathaway, Antonia Bennett, Lauren Kinhan, and Robin McKelle—who have all crooned their way through her classes, there is no doubt of her success.