Pianist Jeffrey Todd Cohen of Local 802 (New York City) is passionate about transcribing the recordings of jazz icons like Oscar Peterson, Wayne Shorter, Lee Morgan, Phineas Newborn Jr., and J.J. Johnson. It all started when Cohen was a teenager trying to learn to compose. He thought of transcribing Peterson as a way to get inside the head of the pianist and composer and improve his improvisational skills.

“I was trying to learn how to improvise by following Oscar Peterson’s logic,” explains Cohen. For many tunes he has transcribed the complete recording, including all of the solos. 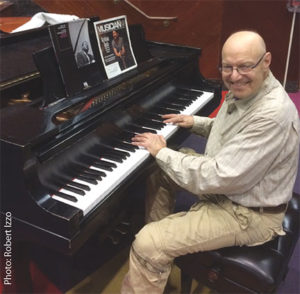 Eager to also improve his lyric writing skills, Cohen began putting lyrics to some of the songs he had transcribed. “It started out as an exercise and became more like an entity in itself—this amazing project that is so important to so many musicians,” he says.
When Cohen sets out to put lyrics to a tune he says it’s not always easy. “I may have limited initial ideas, but if they seem exhausted, I’ll find myself researching the title,” he explains.

For example, for Lee Morgan’s “Totem Pole,” Cohen pored through library books on totem poles. “I found a ‘Legend of the Eagle and the Chief,’ which made a great second verse and a way of retitling the song.”

For Wayne Shorter’s “Wild Flower,” which eventually became Cohen’s “Little Bellflower,” he studied a book on wild flower lore. When it came time to put lyric to the Lee Morgan tune “Morgan the Pirate” Cohen says he watched an old 1930s Captain Kidd movie over and over for an entire weekend to find inspiration.

After Cohen has transcribed a series of tunes and come up with lyrics, he sets up recording sessions to create his own CDs. “I hire musicians and send them the parts in the mail,” he says. “We rehearse the day before and then we record. Later, I overdub the lyrics.”

Cohen has been a member of the AFM since 1968, when he got his first gig as a teenager performing with the Clem DeRosa Big Band.
One proud moment for Cohen was when George Benson’s bassist, Stanley Banks, also a member of Local 802, came to sit in with his group at a library gig. He had contacted Banks and told him he’d written lyrics to the Stevie Wonder tune “We All Remember Wes,” which was recorded on Benson’s live Weekend in L.A. album.

Years after having transcribed 60 to 70 of Peterson’s recordings, totaling about 100-plus pages of music, Cohen was able to publish some of them through Hal Leonard Corporation in the book Oscar Peterson: A Jazz Portrait of Frank Sinatra. It includes tunes from the 1959 Oscar Peterson album by the same name.

Cohen has created several CDs of original tunes, including Behind the Eighties Ball, Bull in a China Shop, Keepin’ It Reels, and Dose DAT Tapes Dere Volumes 1 and 2. He also works as a teacher. His latest project is focused on the compositions of jazz trombonist James Louis “J.J.” Johnson. He’s currently putting lyrics to those transcriptions in preparation for his next recording.