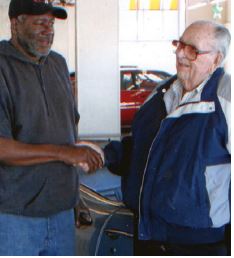 Local 362-691 Board Member Leonard “Pappy” Battise (left) congratulates Secretary Bill Spurlock for his many years of dedicated service to the local.

Local 362-691 (Huntington, WV) honored one of its own for completing 69 years as a member and for serving the past 32 years as its secretary-treasurer. Huntington auto dealer Bill Spurlock was also recognized for his service to the union and the community.

Spurlock is a dedicated musician who plays the sax, flute, clarinet, and more. Even at 86 years old, you can find him regularly working at the auto dealership he founded 30 years ago, and he’s still willing to scrub and polish the floors if necessary.

Spurlock joined Local 362-691, which covers musicians in Ohio, Kentucky and West Virginia, in 1946. “He is very dedicated at any task he does,” says Local 362-691 Board Member Leonard “Pappy” Battise. “But he still conducts business with an ink pen and paper.”

Spurlock is a dedicated family man and a disciplined union member. “He knows the rules and expects others to know and follow them,” says Battise.