For the past 36 years, labor-minded musicians and other artists have gathered at the Great Labor Arts Exchange to celebrate creativity and solidarity. It is a weekend of workshops, films, discussion, poetry, jam sessions, and open mikes, sponsored by the Labor Heritage Foundation. At this year’s gathering, Local 1000 (nongeographic) members Pat Wynne of San Francisco, California, and Charlie King of Shelburne Falls, Massachusetts, received the Joe Hill Lifetime Achievement Award for their work in labor culture.

A longtime labor activist and organizer, Wynne conducts the Bay Area Rockin Solidarity Labor Chorus, which she founded in 1999. Wynne also arranges many of the pieces performed by the group whose members represent many different unions. “Most of the people in my chorus are not solo singers, but with the performance pieces they get to be characters and narrators, so it’s more about participation,” she explains.

Wynne teaches Labor Studies at City College of San Francisco. At the annual Arts Exchange she puts together an ad hoc chorus to perform some of her arrangements on Sunday evening. She formerly worked for the California Faculty Association at San Francisco University for 10 years helping to recruit members. “I was teaching labor studies and decided that I didn’t know enough about unions, so I went to work for one,” she explains. She is also a member of Local 6 (San Francisco, CA). 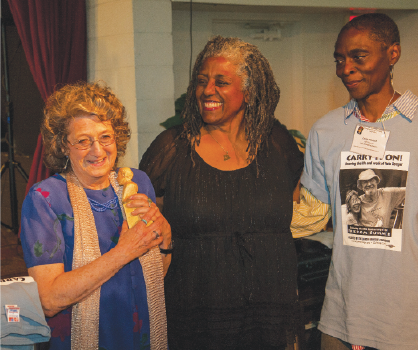 s a DVD her labor chorus performing “The Great Migration, Motown, and Michael Moore.” “That was the most exciting experience to be there,” she says, adding. “So now my whole chorus is in the Library of Congress.”

Charlie King, who has been singing at labor conferences, rallies, and picket lines since 1970, says he was elated to receive the Joe Hill Award. “I’ve been attending the Great Labor Arts Exchange since 1981 and have seen the award presented to Pete Seeker, Utah Phillips, Hazel Dickens, Joe Glazier, and more recently, Anne Feeney, Joe Uehlein, and Jon Fromer,” he says. “It’s thrilling to be counted in that number.”

“My career has been built on singing and writing songs about the extraordinary lives of ordinary people and the struggles for justice that they created,” he says. “My experience is that labor unions are losing the power that comes from songs of struggle. During the rise of unions in the first half of the 20th century, there was never a strike, march, picket line, or rally that wasn’t enlivened by songs. Music kept the struggle alive. Can you imagine the popular victories of the 20th century without ‘We Shall Overcome’ or ‘Solidarity Forever’? I would love to see a rebirth of interest by unions in song as a weapon in the struggle for justice.”

Both Wynne and King are founding members of AFM Local 1000. King, who is a former Local 1000 secretary-treasurer, is also a member of the Industrial Workers of the World Local 630.