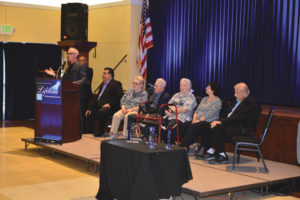 “The efforts of everyday working musicians who have created a meaningful and lasting impact on the artistic community are largely unknown to those outside the music world,” says Local 47 President John Acosta. “Too often, these wonderfully talented artists remain unsung heroes. We are excited to begin this new tradition of shedding a public spotlight in recognition of these most deserving musicians.”

Cipriano first joined the union in high school so he could get booked playing club dates. Throughout the 1940s he built a professional reputation and was a sought after jazz player, joining Tommy Dorsey’s Orchestra. After moving to Los Angeles in the 1950s, he became one of the busiest studio musicians and recorded as part of The Wrecking Crew. He also toured with Frank Sinatra. Cipriano plays many woodwind instruments, including the full range of saxophones, oboes, English horn, flutes, piccolo, and clarinets.

DeRosa launched his horn career in 1935 subbing at the San Carlo Opera Company’s production of La Traviata. He continued performing professionally through 2008. He is one of the most recorded brass players of all time having performed on many film soundtracks, recordings, and television programs. He was first horn for such greats as Henry Mancini, Alfred Newman, Lalo Schifrin of Local 47, and John Williams of Locals 47 and 9-535 (Boston, MA). Outside of Hollywood studios, he was a member of the Abnuceals Imuukha Electric Symphony Orchestra, which recorded Frank Zappa’s first solo album, Lumpy Gravy. His impact on the business includes a new standard for studio horn parts.

DiTullio is one of the most widely heard flutists today, having performed on more than 1,200 motion picture and television scores over four decades. Aside from collaborating with a long list of distinguished film composers, DiTullio has held the principal flute position in many Los Angeles area orchestras and appeared as a soloist with orchestras across the country. She began teaching at age 18 and has served on the faculties of the University of Southern California, Music Academy of the West in Santa Barbara, and California State University at Fullerton. 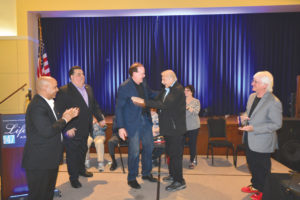 Kaye has played and taught guitar since 1949 and worked in dozens of nightclubs around Los Angeles. She began playing Fender bass (as it was called then) in 1963 when another bassist failed to show up for a recording date at Capitol Records. Soon after, she became first call bassist for record companies, movies, television, and commercials. In the mid-1970s she began performing live with the Hampton Hawes Jazz Trio. A leader in electric bass education, she’s given seminars across the nation and written bass tutoring books.

Nash played with many big bands and ballroom bands during the 1940s and 1950s, traveling with Billy May and with other bands. In 1953 he relocated to Los Angeles. His first LA break came when Tommy Pederson arranged a job for him with a local big band. He soon became a first call studio musician. He was Henry Mancini’s favorite trombonist and is a featured soloist on several of the composer’s soundtracks. In 1959 he played bass trombone on Art Pepper + Eleven—Modern Jazz Classics.

Local 47 says that this event was just the first of many ceremonies planned to highlight and recognize its members.