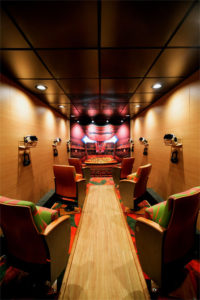 From September 11 through October 18 diverse communities throughout Los Angeles, California, will have the opportunity to board a truck to experience the first five minutes of a Los Angeles Philharmonic performance of Beethoven’s Symphony No. 5 through virtual reality. Visitors will be welcomed aboard the customized VAN Beethoven truck, complete with carpet and seating from Walt Disney Concert Hall. Once aboard, they will put on an Oculus headset and be transported to the iconic venue in an immersive, 360-degree, 3D environment. The private experience is augmented by a soundtrack that subtly shifts and adapts to the viewer’s perspective to give the feeling of being up close at a LA Philharmonic concert. The truck’s schedule (LAPhil.com/VANBeethoven) includes stops at parks, festivals, museums, and more.