New York City jazz artists and their supporters testified before the City Council Committee on Cultural Affairs, Libraries, and International Intergroup Relations and Committee on Civil Service & Labor requesting they endorse Resolution 207-A in support of Local 802’s (New York City) Justice for Jazz Artists Campaign. Some of the world’s best jazz artists spend their lives working in New York’s prestigious and profitable jazz clubs, yet are denied basic benefits and pension, and are left to retire in poverty. Justice for Jazz Artists is dedicated to remedying that situation. 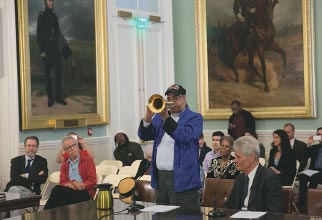 The AFM explained that the owners of clubs such as Birdland, the Blue Note, Dizzy’s Club Coca-Cola, Jazz Standard, and the Village Vanguard reneged on a 2006 promise to pay pension benefits, in exchange for a tax break. “If clubs had implemented this plan five years ago, there would already have been up to $3 million redirected into a fund for musicians. That money would have gone a long way to helping people who have no savings to begin a retirement plan for themselves and their families. This money not only helps musicians, it helps to keep the music alive,” says Local 802 member and NEA Jazz Master Jimmy Owens who also performed “Nobody Knows the Trouble I’ve Seen” on flugelhorn for the council members.

The resolution was co-sponsored by City Council members Jimmy Van Bramer, Laurie Cumbo, and Corey Johnson. “Jazz artists—both past and present—have significantly contributed to the unique cultural experience that attracts tourists and locals to venues across New York City. These men and women are hard-working musicians who deserve economic stability and security to support themselves and their families. I look forward to working with my colleagues to protect the livelihood of musicians and ensure that the arts continue to flourish within our communities,” says Cumbo.

Local 802 Recording Vice President John O’Connor and AFL-CIO New York City Central Labor Council Representative Alex Gleason also testified. “Local 802 is eager to work with any nightclub willing to do the right thing,” says O’Connor. “We appeal to the City Council to pass Resolution 207-A to draw attention to this longstanding problem and help these deserving musicians to correct this injustice.”