Professor Jon Damian Taps into the Universe for Inspiration 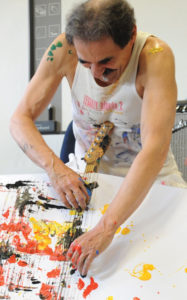 At Berklee College of Music, professor and guitarist Jon Damian of Local 9-535 (Boston, MA) says, “When I’m teaching, I’m composing. I have to be able to compose on the spot as an example. It’s important to be able to see it actually come alive in someone’s hands and face. Teaching and composing, writing, they work in tandem.”

In his renowned Creative Workshop Ensemble, he focuses on unconventional motifs and nonmusical forms—art and multimedia exercises—to heighten listening skills and teach students to draw on more than music for composing, from alphabets to zodiacs. He explains the better students become as improvisers, the less they tend to respond to musical events around them. “In the Creative Workshop, we’re inspired by anything in the universe.” With everyday language, for instance, he adds, “Go to the piano and play ‘popcorn, air, or mozzarella.’ No two people do the same thing. The language of words becomes a medium. To use it to stimulate a musical idea is cool.”

One of Damian’s earliest music memories is listening to his mother whistle. “It was like listening to an aria.” But it was his older sister Judy’s vast record collection that introduced him to everything from Count Basie and Tony Bennett to opera and classical recordings of Claude Debussy and Béla Bartok.

His first music experience was vocal. He sang in a cappella groups in Brooklyn. “We were a nice, serious trio that used to sing on the street corners,” he says.

Watching Tony Mottola on The Tonight Show, Damian remembers, “His beautiful solo guitar, swing and rock—I watched and listened, and I said, ‘Wow, I want to do that.’ And that’s what happened.”

Damian began teaching himself to play guitar and read music. One of his first gigs was a veterans hospital near Coney Island with his band, The Strangers. They played the Merry-Go-Round Room in Brooklyn, which had a rotating bar, and that’s when he joined the union. “I still have my cabaret card that says I am able to play in nightclubs.” Damian remembers going to the union office, which was in the same building as the Roseland Ballroom. “Duke would come and play. People would dance. During the day, union musicians would meet and talk, and there would be auditions happening right there.”

Damian’s all-embracing creative model is based on his early career as a visual artist. He worked on Madison Avenue back in 1965 until he was drafted into the army in 1966. His military occupational standing (MOS) was as an artist in the officer’s training unit.

As bleak a prospect as it was, being drafted proved to be a defining moment in Damian’s life. “Brooklyn was just as dangerous as the army. My friends were getting into drugs. For a kid in 1966, it was scary, but for me, it was exciting. Wherever I was stationed, I always studied at the clubs so it was like a paid education,” he says.

The army became a major part of Damian’s musical development. He says, “I was able to go to service clubs, which had instruments and libraries full of music books so I spent all my free time continuing my music training on my own.” He sharpened his reading proficiency to a professional level and auditioned for a larger ensemble.

After the army, Damian attended Berklee on the GI bill, where he studied theory and composition. He’s been a full professor there ever since, for 43 years.

For years, Damian kept busy doing theater work, playing with Boston Symphony Orchestra, Boston Pops, Boston Ballet Orchestra, and Boston Opera Company. “I’ve been fortunate to have such a wide spectrum of possibilities,” says Damian, who has worked with Phil Woods, Sam Rivers, Sheila Jordan, Johnny Cash, Howard McGhee, Leonard Bernstein, and Luciano Pavarotti (at the Boston Garden), to name a few. He’s also shared the stage with a number of his students, notably jazz luminary Bill Frisell of Local 76-493 (Seattle, WA) with whom he recorded the CD, Dedications: Faces and Places.

In his book, the Guitarist’s Guide to Composing and Improvising, Damian shows musicians how to break out of pattern-based playing to enrich their understanding of composition and improvisation. In his latest book, Fresh Music: Explorations with the Creative Workshop Ensemble for Musicians, Artists, and Teachers, he chronicles the ideas in the workshop he’s been teaching since the 1970s.

Damian’s interest in avant-garde music led him to explore other instrumental mediums. One of his innovations is the Rubbertellie, an electric guitar that stretches the boundaries of the traditional guitar. It’s tuned differently, held differently, on his lap or in the style of viola da gamba.

Now, midway to retirement as a part-time professor, he’s finding time to write books for his grandchildren and compose more music. Last year, when he was hospitalized for an extended period, he wrote a woodwind quartet for his caregivers called “Saints and Angels.” He explains, “It’s not too pretty or sad, but more of a soft Schoenberg, a natural roll that builds from chord symbols.” Damian says, “It creates the power of connections. It’s serious, but hopeful.”