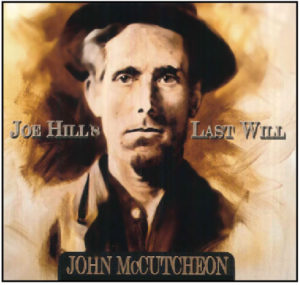 Remembering the Greatest Labor Songwriter the Nation Has Ever Known

On November 19, musicians, activists, and civic leaders in Utah will join together to commemorate the life, death, and music of Joe Hill. “He’s the most famous labor martyr in American history, and he happens to be a musician,” says John McCutcheon, a member of Locals 1000 (Nongeographic) and 148-462 (Atlanta, GA).

McCutcheon plays the role of Joe Hill in the one-man play Joe Hill’s Last Will. Before a November 19 performance at The Stateroom in Salt Lake City there will be a discussion panel featuring McCutcheon, Joe Hill’s Last Will playwright and Local 1000 member Si Kahn, historian John Sillito, and William Adler, author of a Joe Hill biography.

The play is set in a 1915 Utah State Prison cell where Hill awaits his execution. A reporter has been sent to get Hill’s last words. In the role of Hill, McCutcheon recounts Hill’s life story through his songs.
Hill was born Joel Hägglund in Gävle, Sweden. As a child, he worked in a rope factory following the death of his father. He immigrated to the US around the turn of the century and adopted the name Hill after being blacklisted for trying to start a union in Chicago. He became a songwriter for the Industrial Workers of the World (aka IWW or Wobblies), penning songs like “The Preacher and the Slave,” “Casey Jones—the Union Scab,” “Mr. Block,” “Workers of the World Awaken,” and “There is Power in a Union.”

“There were a lot of people writing songs,” McCutcheon explains. “They had The Little Red Songbook, which was designed small enough to fit in a worker’s pocket. When it was time for music, they all sang the songs, which were written to the music of popular songs. Joe Hill laid the blueprint for that.”

When Hill arrived in Utah with his friend Otto Appelquist in the fall of 1913, Salt Lake City was not welcoming due to a recent riot involving IWW members. “It was an important time in American history,” says McCutcheon. “There were anti-immigrant purges; it was the robber baron days.”

On the evening January 10, 1914, Hill sought medical treatment for a gunshot wound. He told the doctor that he had been shot “by a friend in a quarrel over a woman,” but refused to elaborate. On the same evening, a Salt Lake City grocer named John G. Morrison and his teenage son, Arling, were shot and killed by two masked men. Police thought Arling might have shot one of the intruders.

The doctor who had treated Hill reported his injury to the police, and Hill was arrested for the grocer’s murder four days later. Though no motive was given and there were no reliable witnesses, Hill was found guilty of first-degree murder based on only circumstantial evidence.

At his sentencing, Hill chose to die by firing squad. Appeals to the Utah Supreme Court and Utah Governor William Spry, as well as an IWW letter-writing campaign, failed to overturn the conviction. A prolific writer, Hill continued writing articles and songs during his imprisonment. The 36-year-old was executed November 19, 1915.

Hill’s last will was written in the form of a poem: “My last will is easy to decide; For there is nothing to divide; My kin don’t need to fuss and moan; ‘Moss does not cling to a rolling stone’; My body? Oh—If I could choose; I would to ashes it reduce; And let the merry breezes blow; My dust to where some flowers grow. Perhaps some fading flower then; Would come to life and bloom again. This is my last and final will; Good luck to all of you—Joe Hill.”

His final request was that he not be “found dead in Utah.” Hill was cremated and his ashes were sent to union halls to be scattered in every state except Utah.

“He’s inspired so many people,” says McCutcheon. “This was just an ordinary guy. What was extraordinary was that English was not his first language and yet his command of the language, his cleverness with it, was just breathtaking.”

McCutcheon hopes that people who see the play will think about how these events of 100 years ago still resonate today. “We have a situation today where worker rights are being taken away right and left. We have a huge immigrant work force that they are clamping down on and discriminating against. We still struggle with the death penalty and war on a global scale,” he says.

“I would love for people to think that music is instrumental, rather than just merely ornamental. The Wobblies got that and used it to great effect; the civil rights movement used it. We haven’t been very good about using it in modern social movements,” he continues. “Hopefully, there are some young Joe Hills out there that will pick up this gauntlet and say, ‘We want music to be useful, not only to be a means of profit, and we want it to reflect what people are thinking about and caring about.’ Nobody did that better than Joe Hill, and he’s been showing us how to do it for 100 years.”