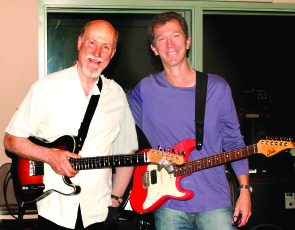 The album Jimmy McIntosh, a Downbeat editor’s pick, features the Local 369 (Las Vegas, NV) guitarist jamming out with some of his musical heroes, including John Scofield (left) of Local 802 (New York City) .

You could say that Las Vegas guitarist Jimmy McIntosh has built his life and career around music business connections. The best example may be his latest CD, Jimmy McIntosh and … which features McIntosh exchanging licks with some of his personal heroes, including John Scofield and Mike Stern of Local 802 (New York City), plus Ronnie Wood of The Rolling Stones.

McIntosh’s earliest connection to the music industry goes way back to his mom’s friendship with Duke Ellington, who was a major influence when McIntosh was a young musician. Ellington bought McIntosh his first instrument when he was in 7th grade—a Bb French horn.

“Whenever he was playing in Detroit, Cincinnati, or Toledo we would go see him,” says McIntosh, who grew up in Temperance, Michigan, on the border with Ohio. “He would chip in money for private lessons.” The afternoon before McIntosh’s first school performance Ellington called to give him a pep talk.

After graduating from college, McIntosh moved to Las Vegas, a city he was also profoundly connected to and visited frequently while growing up. “Our roots are in Las Vegas,” he says. “My grandfather built the first permanent structure—a saloon called the Arizona Club.”

When he arrived in Vegas in 1981, McIntosh reached out to a musician he’d met at Berklee College of Music who was already working there. “I didn’t have any experience as a professional musician,” says McIntosh. “He told me to start at one end of the Las Vegas strip and go to every place that had live music and introduce myself to the band and see if I could sit in.”

McIntosh also joined the union, Local 369 (Las Vegas, NV). “My goal was always to get good union gigs. The best jobs are union,” he says. “There was a really nice union hall on Duke Ellington Boulevard and they would have bands on Thursday, Friday, and Saturday nights where they would get together and play big band music. I would go down and hang out.”

Throughout the years, his career expanded until he became an in-demand Vegas guitarist. McIntosh says the union has been important to that growth. Though he admits he’s played some “Vegassy” gigs that were kind of corny, he’s also managed to share the stage with quite a few big name musicians.

For a while, McIntosh played a show called Legends in Concert at the Imperial Palace. Through that job, he also worked as the house band for several annual cerebral palsy telethons. “Billy Preston was on the last one,” he says. “Playing with him was a real highlight. I was about 26 at the time.”

One steady gig for the past 25 years has been with the Lon Bronson All-Star Band. “We do a lot of Tower of Power and that kind of thing,” McIntosh says. “It’s made up of some of the best players in town who do other full-time gigs.” Aside from playing after-hours shows a couple nights a week, for a while, the All-Star Band played on a show on Comedy Central called Viva Variety.

A big fan of Penn & Teller, McIntosh was particularly pleased to get a gig playing for the magician duo’s Sin City Spectacular variety show broadcast on the FX Network 1998-1999. “It was fun and challenged your reading,” he says. It also gave him an opportunity to work with a wide variety of musicians, including Lyle Lovett of Local 257 (Nashville, TN), Jennifer Holiday, and Slash of Local 47 (Los Angeles, CA). Other career highlights include working with David Foster and Kenny Loggins of Local 47, Donna Summer, and Gloria Gaynor.

Though McIntosh works steadily, he says the Vegas music scene is not as great as it used to be. “I think the heyday for working musicians was the ’60s and ’70s, when every little lounge had a duo or trio playing,” he says. “Now there’s some lounge work, but not that much. Musicians still move here, but like any place, it takes a little while to get plugged in.”

“Broadway shows have been really good for Vegas,” he continues. McIntosh played Mamma Mia in the Mandalay Bay for five years and then moved over to Jersey Boys for the past eight years. “I enjoy the steady gig, and then I can do something creative on the side. I have a trio with Keith Hubacher and José “Pepe” Jimenez [both members of Local 369].”

Having a steady gig allowed McIntosh to launch his first solo album, New Orleans to London, in 2006. “It was always in the back of my mind that I wanted to make a record. All of my musical heroes wrote their own material, so I kind of think that’s the ultimate thing to do,” he says. “Then my father passed away in 2001. That’s what got me thinking—life is short; it’s time for me to make a musical statement.” He wanted to ask the Neville Brothers to be on the album, so he set a date when they would be in town.

It was Art Neville of 174-496 (New Orleans, LA) who first introduced McIntosh to Ronnie Wood backstage at a Las Vegas Stones show. They reconnected through Wood’s manager, and Woods agreed to play on that first solo project, New Orleans to London. McIntosh flew out to London to record five tracks with Wood, and was surprised when Jeff Beck also showed up and played on three tracks.

“Ronnie and I hit it off fantastically and we stayed in touch, so when I started the second record, Jimmy McIntosh and …, I was hoping he would play on it,” says McIntosh. Wood agreed and he and McIntosh played two improvised jams to open and close the album, plus Wood played on McIntosh’s cover of Wood’s “I Gotta See.” “The Rolling Stones have been my favorite band since I was a kid, so getting to work and play with Ronnie is literally a dream come true.”

Violist Wendy Richman of Locals 802 (New York City) and 47 (Los Angeles, CA) has made contemporary music her main focus on both coasts.