Home » On the Cover » Jim Brickman 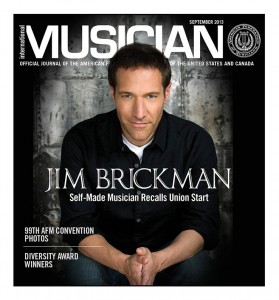 Jim Brickman of Local 4 (Cleveland, OH) jumped into the music industry early. While still in school in 1980, he started his own company, The Brickman Arrangement, from his dorm room at the Cleveland Institute of Music. He used his natural inclination toward hook writing and his pop sensibilities to start composing jingles for companies like Isuzu, McDonald’s, and Pontiac.

“I always had a knack as a songwriter in writing hooks, but I wasn’t mature enough as a songwriter to write about life or love,” he says at age 51, looking back on his youthful lack of experience. “I wasn’t in touch with myself enough to write a meaningful song. But when you’re a jingle writer copy points are presented to you and you craft the music and lyrics to fit the product—it has borders around it, structure.”

“Every day is a different style of music. It’s an incredible education, in a short time, and very challenging especially at 18 or 21 years old,” he says. It was a great entry point to songwriting and producing in a town that doesn’t offer many choices.”

That’s when Brickman first joined the union. The AFM helped him a great deal when it came to contracts, but soon he discovered many other benefits.

“In Cleveland, it was advocacy,” he says. “You could go to them [the AFM] with questions, especially with commercial jingles. I was always interacting with them about how to get paid, how to find new people, and ways to work within [a contract].”

Though Brickman is today the most charted male adult contemporary artist, with six gold and platinum albums, those early jingle-writing experiences still affect him. When he got his start, artists like Michael Bolton, Cyndi Lauper, and Marc Cohn of Local 802 were singing commercials and Brickman took advantage of his contact with the more experienced performers.

“Some of them, I’d call up and they’d talk to me. Now, thinking back, I guess I was really tenacious. They didn’t have to be as nice, or respond the way they did. Lots of people really took a chance on me and believed in me at a really early age,” he says, adding that it’s unlikelytoday that a 20-year-old kid would be the producer of a bank commercial.

After more than two dozen albums and having worked with artists including Kenny Loggins, Herb Alpert, and Dave Koz of Local 47 (Los Angeles, CA), Olivia Newton-John, Richie McDonald of Local 257 (Nashville, TN), Michelle Wright of Local 149 (Toronto, ON), and more, Brickman can still be considered tenacious, branching out in many different directions.

“I always look for what’s next and opportunities,” he says. “You can get down about where you are—if things aren’t working or you’re not selling enough. Looking forward is always important.”

Brickman started releasing albums in 1994 with No Words and the single “Rocket to the Moon” became the first solo instrumental ranked on Billboard charts. His second album, By Heart, was released in 1995, and he continued to release albums almost annually after that. He’s had two Grammy nominations, received a SESAC “Songwriter of the Year” award, and a Canadian Country Music Award for “Best Vocal/Instrumental collaboration.” A new Christmas album is due out later this year.

He also hosts the weekly radio program Your Weekend with Jim Brickman that’s heard on 80 radio stations, has organized annual fan cruises for seven years, and even held a songwriting workshop weekend in Nashville this July. All of that is on top of his almost year-round touring schedule, where he visits much of the US each year. Touring is another area where he says his AFM membership continues to help him.

“When I’m looking for musicians to tour, in smaller towns especially, it’s easier,” he says about his union contacts, adding that he’s also grateful that the organization is there to back them up. “In New York, L.A—they’re making sure that their members are taken care of, that union musicians are getting a fair shake.”

One of the most commercially successful pop pianists and songwriters of the past two decades, Brickman credits his achievements to hard work and putting in the hours, though he emphasizes that he’s not a proponent of telling other musicians what will or won’t work for them. Above all, for him, it was about being committed to being a musician.

“Music has to come first, and it can’t be a choice,” he says. “Like, ‘Should I be an insurance salesman or a musician?’ If there’s an ‘or,’ then it’s not something that’s meant to be, I think. I never felt that I had a choice.”

“Then, take every chance you have to go play, wherever you can,” he adds, but it’s not about being “discovered.”

“I think there’s a message sent out by these talent shows that all you have to do is wait in line to show someone your technique,” he says, referring to shows like American Idol. “For longevity in your career, you have to build it slowly. It really is a marathon. If you want to last, you have to get out and do it. It doesn’t matter if it’s for five people or 5,000.”

He also advises young musicians to join the union, but don’t expect that they are going to make your career happen for you. “It’s always a two-way street,” he says. “You have to be involved and advocate for yourself. I think it’s important to have dialogue and not necessarily think what they’ll do for you. The AFM will help you, but you have to be involved.”