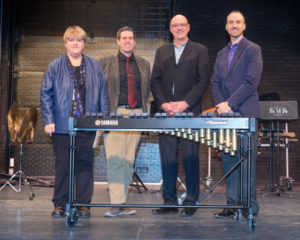 Saxophonist and Local 257 (Nashville, TN) member Jeff Coffin of the Dave Matthews Band paid a surprise visit to music students and their teacher at Spaulding High School in Rochester, New Hampshire. Coffin performed with the school’s concert band, spoke to students, and together with Yamaha, presented them with a new Yamaha YX-500F xylophone valued at more than $4,000. Coffin, who attended Spaulding High School, recalled his friendships and lessons learned from his time spent in Rochester.

The event was a joint effort by Yamaha in conjunction with DonorsChoose.org—a nonprofit that accepts donations large and small from individuals and institutions providing aid so far to 659 public school programs all over the country. Yamaha has matched 3,000 citizen donations, contributing $250,000 to $500,000 worth of instruments, affecting the lives of about 163,000 music students and nearly 700 teachers.

According to Lisa MacDonald, director of marketing for Yamaha Corporation of America, awareness and inspiration are just as important as equipment. “We hope music lovers everywhere will follow his lead and investigate how they can help a music teacher in their area,” she says. “Supporting a music program is an investment in the success of our children as well-rounded human beings.”