One of the first things I did in 2005, as the incoming AFM Secretary-Treasurer was to take inventory of the responsibilities of the position. I did this, of course, by reading the AFM Bylaws. The Secretary-Treasurer is also the publisher of the International Musician (IM). The IM is the official means of communication between the Federation and its members. All official business is put forth in this publication.

As I sat at my desk at 1501 Broadway in New York City, I looked across the room at the bookshelf filled with bound archives of the International Musician, dating back to 1896. Each was filled with news articles and editorials discussing and reporting the problems of the day experienced by members.  As I looked at those bound volumes, I noted the changes. 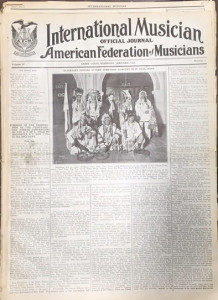 Upon examining the IM in 2005 when I took office, I decided that we needed to move to a different, more readable format. We redesigned the publication to have a slick color cover, and eventually it became a full four-color magazine with more pages. I also wanted to offer more information for the everyday freelancing musician, so the “Working Musician” section was born. We’ve made every attempt to include more stories of members and present more relevant information in terms of resources and career and health tips.

The IM is now available in a digital version. While some AFM members opt to receive only the online publication, the overwhelming majority of our membership still looks forward to receiving the IM in their mailboxes on the first of each month. They regard their IM subscriptions as one of the benefits of AFM membership.

Recently, there has been some discussion about doing only an online version. However, I do not agree with this idea. I believe we need both. The New York Times and other papers of the day have both. While I get The Atlantic monthly on my kindle, and not the paper version, I still like to thumb through the Sunday New York Times and the International Musician. There’s nothing like unplugging and catching up with notable musicians mentioned in the pages of the IM.

Federation Agreements Provide Stability in a World of Pandemic Unpredictability

As I compose this month’s column, I’ve received notice from the American Arbitration Association (AAA) that musicians employed under the Federation’s Motion Picture Film and Television Film Agreements have ratified a one-year extension to those agreements, extending all provisions of the existing agreements together with a 3% increase in wages. That extension preserves and protects […]

As the ball has dropped in Times Square ushering in the 2022 New Year, the hope is that this year will bring improved work situations for all AFM members. Last year brought the reopening of some theaters and music venues, but the return to full employment has been elusive. While we all want to get […]