The 55th annual International Conference of Symphony and Opera Musicians (ICSOM) Conference, hosted by the Buffalo Philharmonic Orchestra (BPO) and Local 92, was held at the Adam’s Mark Hotel in Buffalo, New York, August 23-26.

ICSOM delegates once again volunteered for a special service event in our host orchestra’s city. This time they partnered with BPO Kids for Exceptional Kids, a program benefiting kids with autism spectrum disorders, cancer, and other chronic physical or health challenges. Thanks to BPO ICSOM Delegate and Member-at-Large Dan Sweeley (of Local 92) for putting this and other conference activities together.

In her first year as ICSOM chair, Meredith Snow (Los Angeles Philharmonic, Local 47) gave the opening address. She reminded delegates that, as our orchestra committees have become stronger, there is a risk that our orchestras may come to view the AFM as a separate entity. But we, the musicians, are the union. We need to uphold the value of our labor and stand up for our colleagues. Individual actions matter. She encouraged ICSOM musicians to reinforce their commitment to their locals, the AFM, and each other. ICSOM is here to help ensure that everyone thrives.

Case moderated a panel of orchestra leaders—musicians, administrative, conductors, and a mediator—that examined the dynamics of orchestra relations in a discussion entitled “Back from the Brink.” ICSOM provided a luncheon for members-at-large and their orchestra delegates to discuss a broad range of issues. Each member-at-large oversees 13 orchestras. Following lunch, Meredith Snow moderated a panel discussion examining diversity within our orchestral organizations. More than 40 conference attendees went to view the American Falls at Niagara Falls in the evening. 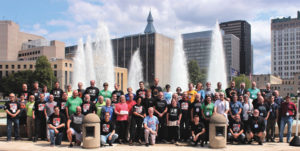 A large group of attendees from the 55th Annual International Conference of Symphony and Opera Musicians (ICSOM) gathered in front of the Adam’s Mark Hotel Fountain in Buffalo, New York. They were wearing T-shirts supporting individual orchestras and arts organizations.

On Saturday, Cypress Media President Randy Whatley provided tips about how musicians can craft a community relations program. Kevin Case introduced a welcome addition to the conference: an open forum for delegates to ask questions of legal counsel.

Delegates adopted resolutions addressing the AFM-EPF, national right to work legislation, implementation of an online conductor evaluation survey, and ICSOM’s response to recent events in Charlottesville, Virginia. Resolutions were also adopted honoring George Brown as he stepped down as ICSOM President, and Paul Gunther of Local 30-73 (Minneapolis-St. Paul, MN) who stepped down as a member-at-large after 11 years, following his retirement from the Minnesota Orchestra.

Many thanks to the Buffalo Philharmonic Orchestra and Local 92 President Jim Pace for a wonderful conference. The 2018 ICSOM Conference will be held in Cincinnati, Ohio, August 22-25.