Home » Officer Columns » Executive Board Members » Help Us, Help You


Help Us, Help You 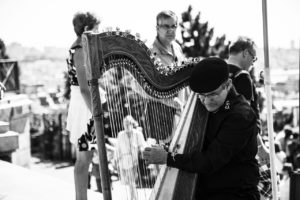 Most musicians don’t fit the stereotypes that some people like to place on us. We are hard-working, productive members of society who provide a soundtrack to the lives of those who may not know what it means to be creative or to try to and make a living in the arts. Many of us are involved in our community as teachers, volunteers, and mentors to the musicians of the future. Musicians often have more obstacles to overcome than the average worker could imagine—yet, somehow we persevere.

The fact that we love to play should never be an obstacle to taking care of business. The major reason why the AFM exists is to help you navigate through the challenges of a constantly changing music industry.

I come from a family of nonmusicians, but I fell in love with the bass at age 10. My love for playing and determination to succeed have helped make many of my childhood dreams come true and I am very grateful for that. I only knew one person in Nashville when I moved there at age 21. I joined AFM Local 257, which helped me connect the dots and have a successful career. My first gigs were as a touring musician. Then I made a gradual transition into studio work, as well as writing, producing, and releasing my own musical projects. For years, my dad would ask, “Are they paying you, son?” And the main reason I could say to him, “Yes, they are,” was because of the AFM.

As I got more involved in my local, I began to see the administrative side of the equation, and recognized the importance of getting employers to sign AFM Agreements in advance of a session or engagement. Nothing is more effective than a bandleader, session leader, or sideman asking that all-important question, “Is this a union session?” and helping to get a signatory agreement in place before the gig happens. Once the gig is over, it is much more difficult to get people to take responsibility for doing things the right way.

Our job is to arm players with the right information, and to help explain to employers that an AFM contract protects everyone involved. For example, when a record is used in a TV show, film, or commercial, the new use payment comes from the third party that is using the recording, and not the original employer. Otherwise, it becomes a game of cat and mouse—the employer hopes the musicians don’t find out about the new use, and the musicians can do little but complain and try to get a piece of the license fee. Without an AFM contract, the chances of that happening are almost nil.

Unfortunately, at almost every turn, there are unscrupulous employers who will try to take advantage of musicians who take them at their word. When these people sign an AFM agreement—whether or not they ever intended to follow through—we have the leverage to make it right. I recently concluded a 4 1/2-year quest to get musicians paid for reruns of TV shows done under an AFM Agreement more than 20 years ago. I have been chasing another deadbeat musician/producer for nearly 10 years, and have recovered more than 25% of what is due, with more coming.

This is all because of the legal protections our contracts give musicians who do AFM work. If these projects had not been done under AFM agreements, I would not have been able to get the musicians involved paid for their work. This has not been easy, but it is important to stand up for treating musicians with respect.

Here’s the bottom line: for 120 years the AFM has been looking out for musicians. Help us, help you, and let’s work together to make things right. If we don’t have your back, who does?