Harvey Mason—Chameleon Is King of Versatility

Harvey Mason of Local 47 (Los Angeles, CA) is not only one of the most recorded and in-demand drummers of all time, but he’s also one of the founders of the award-winning contemporary jazz group Fourplay, plus a talented composer. As a session drummer he’s played with everyone from Duke Ellington and Erroll Garner in the 1960s, Herbie Hancock and George Benson in the 1970s, to Beyoncé, Christina Aguilera, and Usher in more recent years. Altogether, he’s been recorded on more than 1,000 albums and on 150 motion picture soundtracks. It’s easy to see why he is nicknamed the Chameleon. 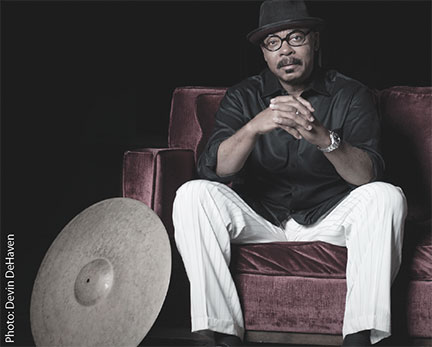 Harvey Mason of Local 47 (Los Angeles, CA) is nicknamed the Chameleon for his versatility in adapting to a wide range of genres.

Mason began his career playing with orchestras and bands as a child, which he says taught him discipline. “When you stepped out of line you were very clearly recognized by the conductor,” he recalls. “When I started playing the drum set around 13, I already had the concept in mind of what the drums should be doing.”

He recalls first joining the union in his hometown of Atlantic City when he was around 14 years old. “I used to go to the union [hall] and they had an old timer’s band that rehearsed there. I played with those guys when I was very young,” he says. “Those guys wanted certain things from the drums, so I adhered to that and I learned a lot.”

Mason credits the union with setting rates and monitoring the work environment for musicians so they are treated fairly. “They set rules and stipulations with the big companies that make movies and records to make sure you get paid,” says Mason, adding that the royalties and pension have been incredible.

Mason headed out to the West Coast after studies at Berklee College of Music and New England Conservatory of Music. Launching his career as a session musician, his first big break was playing for Here’s Lucy (the Lucille Ball show) with George Shearing. “People heard me and started calling me and it just snowballed from there,” he says of his career. “I wasn’t really interested in being a live player; playing for recorded music was my dream and I achieved it. I love the anonymity and playing so much diverse music.”

Rather than focusing on developing a style, Mason says he’s always tried to play in as many different ways as possible. “Sometimes a style can be a detriment because you sound a certain way; you are not valuable if you are not able to switch styles,” he says. “You are better off as a musician if you can play in a lot of different situations.”
“I love all kinds of music,” he explains. “As I was called, I tried to make absolutely the best music I could in every situation. It has always been my MO to try and sound authentic—to find out what made a particular kind of music click from my chair.”

As people in the industry saw Mason’s skill, adaptability, and professionalism, his demand grew. “I really didn’t seek out different experiences; they just sort of came to me,” says the musician who’s played in country, Latin, and R&B bands, as well as orchestras. “I was more than willing to explore.”

In 1976, Mason signed his first record deal for five albums. He has released nine albums as bandleader to date. Mason’s latest album, Chameleon (April 2014), revisits and reinvents a number of projects he’d either written or played earlier in his career.

The lead song, “Chameleon” was a tune Mason had co-written for Herbie Hancock’s Head Hunters album (1974). Chameleon also includes a hip-hop version of Bobby Hutcherson’s “Montara” (1975), as well as a hip-hop/jazz arrangement of Mason’s ballad “Either Way,” and updated arrangements of Quincy Jones’ “If I Ever Lose This Heaven” (1974), Patrice Rushen’s “Before the Dawn” (1974), and Donald Byrd’s “Places and Spaces” (1975). Mason says he is surprised about how strongly ’70s jazz-funk resonates with today’s young jazz musicians.

Much of Mason’s creative energy these days is also focused on jazz “super group” Fourplay, which includes Bob James of Local 802 (New York City), Nathan East of Local 47, and Chuck Loeb of Local 802. Mason says that when James, East, Lee Ritenour of Local 47, and himself founded the band in 1991, they had hoped it would have longevity, agreeing that there’s a special chemistry between them. “When you see us play, you can see it, feel it, and hear it—that feeling has been there from the beginning,” he says.

The group’s new CD, Silver, marking Fourplay’s 25th year and 14th album, is out this month. Mason explains that the four composers use a democratic process to decide which tunes to record. “Everyone plays their songs to the guys in the band and hopes they are going to like them,” says Mason.

“Whoever wrote the song is the leader [for his songs] and has the last word, but everyone chimes in and gives ideas,” says Mason. Silver also brought back former Fourplay guitarists Ritenour and Larry Carlton of Local 257 (Nashville, TN), and includes Kirk Whalum of Local 257 on saxophone.

When asked for his advice for up and coming session drummers, Mason points to the keys he believes led to his own success. “Be versatile, learn to compose, learn about different styles of music, produce, and learn about recording. Learn as much as you can because we are not sure which way the industry is going to go,” he says. “You have to be versatile to have staying power.”As the new year begins. Mason will be touring again for Chameleon, and start work on his next CD.