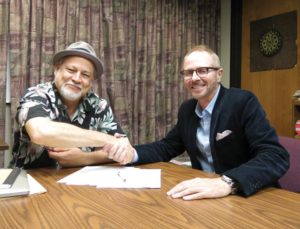 “The rates are very competitive and much better than most options out there,” says Local 257 President Dave Pomeroy. “This is something we have been discussing and working on for a long time. We are very excited it has finally come to fruition.”

This unique and exclusive plan is only available to Local 257 members in good standing who live in Tennessee. Because the Blue Cross Blue Shield network we are using is a nationwide PPO (Blue Network P), it will be especially helpful for touring musicians, as many marketplace ACA plans do not have coverage outside your local area, unless you have a life-threatening emergency.

Local 257 is also offering a reduced rate to join or reactivate during the membership drive in progress now through the end of March 2018. Currently, new and returning members can waive the local and Federation initiation and reinstatement fees when joining Local 257.

The combination of the 2018 membership drive and the new health care plan has resulted in a dramatic increase in member applications since the announcement in mid-November, with more than 100 new members already signed up. This member benefit is one more tangible thing that the Nashville Musicians Association offers its members. For many who have been on the fence about joining in the past, this is already proving to be the tipping point to finally join the AFM.

As our membership numbers increase, so does our collective voice, and this creates the rising tide that lifts all boats. Solidarity rules!

Dystonia Can Derail a Career

Researchers identify dystonia as a neurological disorder characterized by excessive muscle contractions that can result in involuntary, slower movements and abnormal postures. There are several different forms of dystonia, but focal dystonia affects one specific area of the body. This disorder can be disabling to musicians because it causes a loss of muscular control in […]

A post-pandemic return to live music is an opportunity for musicians to re-evaluate hearing health—and to modulate audio levels to reduce the inherent risk of hearing impairment. After more than a year away from a typical concert venue—amid virtual performances—musicians have naturally adjusted their volume to a controlled listening regimen. According to Michael Santucci, Au.D., […]