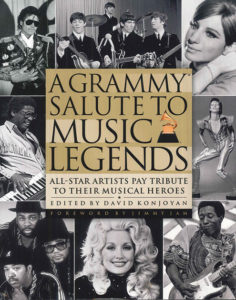 In addition to recognizing the best recordings, each year The Recording Academy honors a handful of musical icons through its Special Merit Awards—Lifetime Achievement, Trustee, and Technical Grammy Awards. Up until now, they were highlighted only in the Grammy program book where noted artists and musicians pay tribute to them. The Recording Academy and Hal Leonard have now collected two decades worth, featuring 87 honorees in this book.