Home » Member Profiles » Out of the Ball Park: Organist Plays the Big League


Out of the Ball Park: Organist Plays the Big League 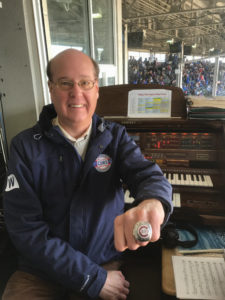 At his organ in the press booth at Wrigley Field, Gary Pressy of Local 10-208 (Chicago, IL) shows off his 2016 World Series ring.

Gary Pressy of Local 10-208 (Chicago, IL) enjoys a seat at Chicago Cubs games like no other player. From his perch in the press booth overlooking Wrigley Field, the Cubs organist, since 1987, has played 2,446 consecutive games without missing a beat.

For Pressy, 59, playing the sonorous organ at Wrigley Field is a dream come true. From the time he was a kid, he knew it was exactly what he wanted to do. He became fascinated with the sound of the organ when he was a just five years old. “I’d listen to games and in the background, you’d hear the organ. My mother says I’d be in the backyard humming the national anthem and ‘Take Me Out to the Ball Game.’”

After years of instruction, including private lessons with local teacher and mentor Russ Caifano, Pressy started playing the organ for Loyola basketball, all the while sending out his resume to teams in Chicago that he knew employed organists. Sports executive John McDonough finally responded. At the time, he was working for the pro soccer team, the Chicago Sting, and he hired Pressy to play. When the time came for the Cubs to hire a full-time organist, McDonough recommended Pressy. “I had my eyes set on one job, and I got lucky. This was always my goal,” says Pressy.

Pressy arrives a few hours before game time. He does his research and brushes up on new songs, but says the standards are crowd pleasers. “I spread the songs around. I won’t play to one generation: Lady Gaga and Sinatra. I don’t want people to scratch their heads, but they’ve got to be catchy tunes,” he explains.

To adjust and time the music, he follows the game as closely as any announcer. “When players come on field, it’s got to come from the top of your head, it’s spontaneous. If the Cubs have players on first and third, I’ll play the song, ‘Down on the Corner.’” Years ago, he’d even supply trivia—this day in Cubs history.

The seventh-inning stretch is the hallmark of the Cubs’ home games, which began when longtime Cubs sportscaster Harry Caray sang “Take Me Out to the Ball Game.” After his death in 1998, the Cubs continued the tradition, but with guest conductors leading the crowd.

It all starts out with “Ah-One! Ah-Two! Ah-Three!” And celebrities from every walk of life have been featured: politicians, athletes, and musicians, like diehard fan Eddie Vedder of Local 76-493 (Seattle, WA) and Ozzie Osborne. In game three of the 2016 World Series, Bill Murray famously performed his rendition as Daffy Duck.

Pressy says, “We have so much fun with the live guests. When these guys come in here, they shed the celebrity persona; it’s pure fan, and just shows their amorous relationship with game of baseball.”

When former Major League player Dave Collins came to sing, Pressy (a huge Boston Celtics fan) says they talked Celtic basketball and reminisced. “All these people are so down to earth. It’s their honor to do it,” he says. After last year’s win, Pressy was on stage playing at Grant Park. “The parade must have had 5 million people. It was a glorious day weather-wise and for a Cub’s fan.”

The Cubs became the first major league team to install an organ at the ballpark in 1941. Roy Nelson played the pregame program to entertain the crowd, but it was short-lived and the organ would not return permanently to Wrigley Field until 1967.

By his own admission, baseball is a hobby that got out of hand. He’s got audio recordings of 250 baseball games from the 1960s and 1970s, plus Boston Celtics games. Pressy says, “I like to listen to those games driving back and forth to the games, fighting traffic. It’s just something I really enjoy. You can hear the organ in the background,” He adds, “Someday, I’d like to write a book about the history of games.”

Pressy joined the union in 1978, which among other things—benefits and pension—initially helped him get a credit card. Of his famous association with a World Series winning team, he says, “I’m just a guy who’s earning a living.”