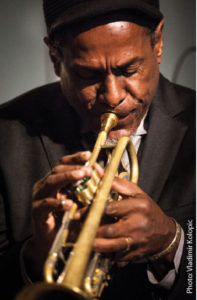 Of all of Jones’ work, the one accomplishment he seems most proud of is the founding of the nonprofit Trumpets4Kids. The organization uses music as a tool to help children learn and shape their lives. “Music fosters the development of attention and listening skills; it assists in emotional development; and music involvement is known to enhance self-esteem and confidence,” explains the Trumpets4Kids.com website.