Home » Officer Columns » My First Year as a Local Officer


My First Year as a Local Officer

This first year has been one of learning and immersion into the behind-the-scenes work of our local. My mentor, Tina Morrison, has been an officer of our local for 17 years, and I have benefited immensely from her experience within the AFM and the broader labor community. 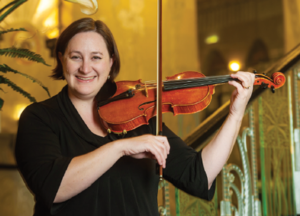 “Other than playing Bach on the streets of Portland back when I was fresh out of college, my position as our local’s secretary-treasurer is the most fulfilling job I have ever had,” says Rachel Dorfman of Local 105.

Each experience has introduced me to new strategies for improving our local and helped me to discover our place within the AFM and the larger labor movement. From Seattle’s Fair Trade Music organizing campaign to Young Sounds in Arizona, locals throughout our union are empowering their members in new and innovative ways. I’ve also learned more about the resources available for our members in need: the Lester Petrillo Fund for Disabled Musicians, MusiCares Grammy Foundation, Sweet Relief, the Foundation for Working Families, and the SAG-AFTRA Actors Fund.

Because of this training and education, I have organized our local’s various responsibilities into the following categories: AFM communications, community outreach, member services, organized labor, organizing and negotiations, promotion, and office management.

This year our local has developed a new website, www.promusic105afm.org. Our Marketing Committee is creating new brochures to promote our local and generate work for our members. Last week, we sent our new AFM Local 105 Teacher List to all of the public school music teachers in our five metropolitan school districts, and to 16 area music shops. We have several organizing campaigns in the works. Our local is talking about doing a benefit concert for one of our local homeless shelters, and we’ve been collaborating with Spokane Arts to organize a downtown summer concert series for 2017.

Other than playing Bach on the streets of Portland back when I was fresh out of college, my position as our local’s secretary-treasurer is the most fulfilling job I have ever had. I actually spent the first six months feeling guilty about enjoying it so much! After all, I’ve been playing the violin since I was a little kid, and I never thought I’d earn a living in any other way. However, if I do this job right, the people that I care about the most will benefit. Our community is more than large enough to support its working musicians, and we will raise the quality of life for our members. As AFM President Ray Hair says, “Musicians standing together have the power.”