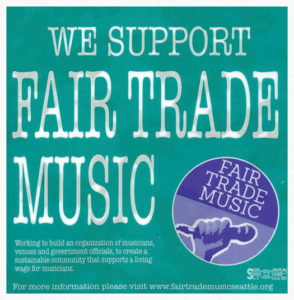 Seattle’s Fair Trade Music campaign has picked up momentum in recent months. More than 20 clubs have signed on as Fair Trade Music venues, City Council has declared Fair Trade Music Day, and additional musician loading zones are in the works. The campaign now has separate committees working on education, research, legislation, and outreach. With funding from Local 76-493 (Seattle, WA) and guidance from the AFM’s Organizing & Education (O&E) Division, Fair Trade Music has also hired a grad student through University of Washington’s Harry Bridges Labor Center to conduct research on the impact of the music industry on the local economy.

How did this happen?

Nate Omdal, a key campaign leader, is an upright bassist who plays jazz and hip-hop. As a result of getting involved in Fair Trade Music, he now sits on the board of Local 76-493. “The training that we had on organizing and on our local music scene was, in some ways, our greatest achievement,” he says. “It got us all on the same page. It showed musicians that we didn’t have any ulterior motives—that we had common problems that we could go after [by] working together.”

After more than a year of steadily building support, the campaign held a panel discussion with musicians from varied genres, stressing that Fair Trade Music needed their input to get a clear picture of the local music scene and to identify issues that are most important to them. “We were satisfied to go slow,” stresses Omdal. “We understood that we had to build the legs before the table. As a result, we picked up people who we can rely on for the next five years—not just activists, but torch-bearers.” 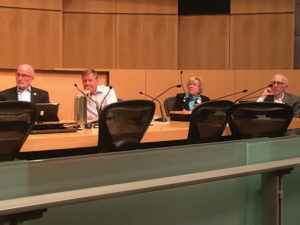 Local 76-493 member Jay Kenney, a pianist and co-founder of Fair Trade Music in Seattle, also cited the importance of the process. “The most important gain of the campaign is the empowerment of musicians that have joined. By working together, we can get stuff done,” he says.

Building on the impetus of that panel, the organizing committee developed templates for performance agreements, as well as a sample e-mail to gather information for agreements. Since then, the campaign has run two successful classes on how to negotiate agreements with club owners.

At the same time that these educational efforts were carried out, the musicians reached out to club owners to sign a Fair Trade Music pledge, and to the political and labor communities to sign a statement of support for the campaign. A dozen musician activists met with members of the Seattle City Council, and with the mayor’s labor liaison. All council members, as well as the mayor, signed the support statement. From there, it was a fairly easy step to get the city council to declare Fair Trade Music Day. Half a dozen musicians joined Jeff Johnson, president of the 400,000-member Washington State Labor Council, in testifying for the resolution.

“We need to recognize that cultural workers are just like other workers,” Johnson says, “but many musicians have no income protection in the clubs.”

David Guilbault, a singer-songwriter, agrees: “Our work is given little or no value. It’s considered a labor of love. But it is labor, and I should be paid for my labor.”

The meetings with council members, as well as the musicians’ testimony, hit home with the city leaders. Council member Nick Licata, a co-sponsor of the resolution, stresses: “This legislation has literally come from the grass roots.” Based on what he learned from the Fair Trade Music leaders, he says that the situation facing many musicians is “basically a form of wage theft, dying from a thousand cuts. For Seattle to remain a national cultural hub, we must treat our musicians to fair working conditions.”

The publicity from Fair Trade Music Day has attracted widespread attention, both in Seattle and nationally. Locally, several more clubs have signed on, plus productions by Seattle Theatre Group at about 20 additional venues. The campaign has attracted attention from several other unions as a model for nontraditional organizing. Articles in Seattle Gay News raised Fair Trade Music’s profile in the LGBT community. Nationally, there has been interest from diverse sources: the AFL-CIO, Working America, as well as an Occupy Wall Street related blog.

Local 76-493 President Motter Snell emphasizes that key to the success of the campaign has been its firm roots among the affected musicians. “We’ve had 30 musicians engaged in organizing activity just in 2015,” she explains. “The outreach to the venues, recruitment of other musicians, talking with elected officials—that’s all been done by musician activists.”

Equally important, decisions about campaign priorities and direction have also come from musicians. “Our local’s leadership and staff, as well as the [AFM] International’s organizing staff, have helped to educate and train the club musicians,” Snell stresses, “but part of empowering the musicians is giving them the authority to make decisions about their work lives.” 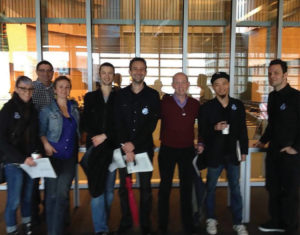 One real asset in the campaign has been the involvement of seasoned professionals who may have little to gain for themselves, like Michael Owcharuk, an established jazz pianist and composer. “It’s a way I can do something civic-minded,” he says. “I can contribute to my field.” He sees his leadership as important for younger musicians, and for the future.

The work of the AFM O&E Division as important for the campaign, says Snell. “The existence of a coordinated national campaign has been tremendously helpful,” she says, “not only in providing guidance and advice, but also in connecting us with other locals facing similar issues.”

Snell also credited pioneering work done by other locals. “Portland came up with this concept, and laid the groundwork. Local 1000 [nongeographic] has provided a lot of guidance with their Fair Trade Music program. And, of course, Nashville [Local 257] led the way with musician loading zones.”

Moving forward, the campaign has several areas of focus,  including putting Fair Trade Music decals (pictured above) in the windows of participating venues and nailing down support from the Martin Luther King Jr. County Council. The Labor Center research project will build on a 2008 City of Seattle study, which found that music contributes $2.6 billion annually to the area economy. The new research will likely show an even greater impact. Fair Trade Music plans to develop classes on the use of social media to promote music, drawing on the knowledge of experienced musicians and the local community college.

On the legislative front, the campaign will explore unreasonable restrictions in noncompete clauses at area festivals, as well as the changing local taxes, which appear to serve neither the music community, nor the city.

Focus will remain on increasing musician involvement in the campaign, as well as expanding the venues signed on to the standards. Once more clubs have signed on, Fair Trade Music hopes to move toward stronger standards for the venues.

“We’re asking that people go to the clubs that treat musicians fairly,” says Omdal. “Seattle values our music, and we call ourselves a music city. We need to back that up by valuing musicians, as well as their music.”