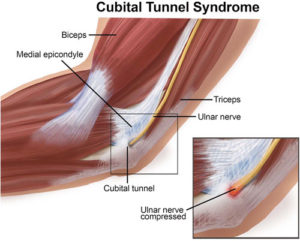 People often refer to any hand and wrist ailment as carpal tunnel syndrome, but ulnar tunnel syndrome (also called cubital tunnel syndrome) affects a specific part of the hand. Symptoms include numbness and tingling in the fifth digit (pinky finger) and half of the ring finger.

Musicians recognize the symptoms—numbness and tingling in the hand and fingers. Compression of the nerve commonly occurs behind the inside part of the elbow. Left untreated the strain can develop into weakness and acute pain in the fingers, which can extend to the elbow.

Unlike carpal tunnel, symptoms related to cubital tunnel syndrome can be better managed with conservative treatment, such as modifying activity level and using a brace. In rare cases, if the nerve compression is causing muscle weakness or severe pain in the hand, surgical intervention may be necessary.

The ulnar is the largest unprotected nerve in the body, which has very little soft tissue and muscle to protect it. Each time a musician bends his or her elbow, the ulnar nerve is slightly compressed. Sustaining a position for several hours a day can wreak havoc on this sensitive nerve. Most musicians need to bend their elbows to 90 degrees to simply hold their instruments. Add to that, normal activities like driving, computer use, and exercise and the pressure quickly multiplies. Oboists and bassoonists who make reeds add yet another occupational hazard by using and bending their elbows for even longer stretches.

Guitarists typically have ulnar tunnel issues in their fretting arm and hand. The bent elbow and arched wrist actually stretches the nerve, and repetitive movement of the fretting hand fingers can cause irritation. Ulnar tunnel issues can sometimes be treated through stretching. You may also need to take a break from playing to allow the body to heal.

Tips to Relieve Pain and Pressure

If you ever feel pain or numbness while playing or performing any activity, stop! Always seek immediate medical advice for pain or injury.

Releasing Tension and Becoming Balanced with the Alexander Technique

The Alexander Technique addresses inefficient habits of movement and patterns of accumulated tension that interfere with our innate ability to move easily. In his book, Body Learning, Michael J. Gelb notes that the technique itself is difficult to define because it involves a new experience. He says, “It’s like trying to explain music to someone who has never […]

Scents, Smells, and Ventilation in the Workplace

When we think of pollution, we think of outdoor air pollution. But most of our exposure to pollutants occurs indoors. For example, air fresheners may emit or cause the formation of numerous substances associated with harmful effects. Claims like “green” and “all natural” on packaging do not have legal or regulatory status.