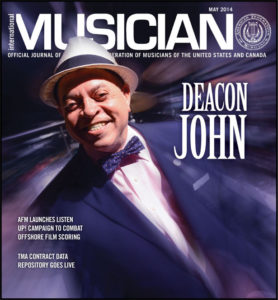 Moore’s mother wanted him to be a singer, but she wasn’t a fan of rock and roll. “She came from a classical background and used to mop the floors singing arias. She wouldn’t let us listen to rock and roll,” he says. He sang in church choir, but other influences were all around.

He discovered the guitar while “chaperoning” his older sisters to teenage dances. “I was nine or 10 years old,” he says. “Just like a magnet, I would go straight up to the bandstand, enthralled by the guitar players.” His influences were guitarists like Roy Montrell, Justin Adams, Papoose Nelson (who played with Fats Domino), and Snooks Eaglin.

“I saw Elvis, and then I saw Chuck Berry, Howling Wolf, Little Richard, Fats Domino, and I was just drawn into the blues and rhythm and blues,” he admits.

Moore’s first success was as a session player. “Allen Toussaint discovered me playing at a popular night spot. He walked up to the stage and asked me if I wanted to play on some records,” he says.

“I played on a lot of classic R&B hits that came out of New Orleans,” recalls Moore, rattling off a long list that includes: Earnie K-Doe’s “Mother-in-Law”; Lee Dorsey’s “Working in the Coal Mine” and “Lover of Love”; Aaron Neville’s “Tell It Like It Is”; Irma Thomas’s “Ruler of My Heart”; and the list goes on. “Once you play on a couple of hit records, everybody wants you because they think you have the magic touch.”

People are often confused by Moore’s name, and assume that the “Deacon” is a man of the cloth. Moore is quick to explain that it’s simply a performing name that he adopted years ago when he started his own band, the Ivories. The group struggled for what to call Moore. Borrowing from the Roy Brown tune “Good Rocking Tonight” (“Deacon John, Elder Brown, two of the slickest cats in town …”), one of the guys in the band said, “Let’s call him Deacon John, he looks like a Deacon.”

“They tagged me with it and I couldn’t get rid of it,” concludes Moore. “I tried at one point in my career and the club owners said, ‘Wow, if I don’t have Deacon John on the marquee, nobody is going to know it’s you playing here.’ So I was stuck with it.”

Moore attributes much of his success to his musical flexibility. “I learned how to play music so that I could get a gig with anybody. I had a well-rounded education in all types of music, which was typical of a New Orleans musician then. Versatility was king. You could go over to someone’s house and they would show you stuff that ain’t in the books. I would play with lots of different types of musicians—jazz, R&B, blues. I was like a chameleon when it came to playing music.”

“I didn’t just play bar rooms,” he says, which is somewhat of an understatement. Moore’s played at the White House, as well as for gubernatorial and mayoral inaugurations, and he’s had roles as a musician on television, in movies, and commercials. But for most of his career, he’s played gigs in and around New Orleans.

Being versatile is one thing, but knowing how to make money is another. Though he always knew he would be a musician, in college Moore majored in business. “It’s the music business; I realized somebody with a business background is going to be more successful. New Orleans has a lot of great musicians that don’t know anything about the business of music,” he says.

He says that being a businessman served him well, especially as the industry changed. “When I was coming up there wasn’t as much competition. There are so many musicians now that there are not enough gigs to go around, so they create this cut-throat mentality. The industry has changed so much. New Orleans doesn’t have the economy of scale like big cities. It ain’t easy in the Big Easy,” he concludes.

Though his main band is still the Ivories, Moore has lots of other projects. “I’ve kept changing, reinventing myself,” he says. “I have a 16-piece big band; I play classic blues, and slide guitar. When people come out to see me they don’t know what I’m going to do.”

His latest CD, Deacon John’s Jump Blues, only his third in an almost six-decade career, salutes what he calls a transitional genre. “Jump blues is the transitional music between the demise of the big bands and the early rhythm and blues that was later called rock and roll. New Orleans plays an important part in the era because the rhythms incorporated in the jump blues came from New Orleans,” he explains.

Though Moore frequently plays weddings, parties, and private events, each spring his focus turns to the New Orleans Jazz & Heritage Festival. “I’m one of the few musicians who’s played every jazz festival since it first started,” he says, adding that he never thought it would grow as big as it is today.

“It’s a good thing, but there are some negative things about it too,” he concedes, explaining how the New Orleans culture is getting lost in the festival. “A lot of attention is focused on the big stars that come down, when really, the heart and soul is the indigenous culture and local people. We get nice money when we play the festival, but in comparison with Bruce Springsteen [of Locals 399 (Asbury Park, NJ) and 47 (Los Angeles, CA)], and all the big names, it’s peanuts. They get paid because of what they draw, and the festival just gets bigger every year.”

“I’m a product of the indigenous culture,” Moore explains. “New Orleans has a unique music and culture—the second line, jazz funerals, the Mardi Gras Indians. Our music is syncopated and a little different from the rest of the country. We have rhythms borrowed from the Caribbean and Africa, ragtime influences, and we are the birthplace of jazz.”

Diversity for the Future

A member of the AFM since 1958, Moore has served as president of Local 174-496 for the past eight years. “I choose to be president because I want to serve the music community. I think I can be a role model for younger musicians,” he says. “I want to make a better workplace for all our musicians.”

Moore says one of his missions is to educate young New Orleans musicians about the union. “They look up to me because I was able to support myself entirely by music my whole life. The first thing I tell them is that we’ve got the information that’s going to help them with their careers—how much to charge to be on a television show, on a commercial, to write a movie score, or to write arrangements for a recording session.”

“Learn your music craft, but it’s really important to learn the business of music,” he tells them. “It’s difficult to avoid the pitfalls of show business unless you know something about publishing, copyright, and how music generates money through different revenue streams—the Internet, SoundExchange, and record stores. One of the best ways to learn about the music business is in the union.”

“Look who’s in the union,” he continues. “Wynton Marsalis [of Local 802 (New York City)], Ellis Marsalis, Allen Toussaint [both of Local 174-496], all the biggest names in show business. If you want to be like them, then it is in your best interest to join.”

Above all, Moore cautions young players against lowering their standards by accepting the two maxims that destroy unions: “a little something is better than nothing” and “if I don’t do it somebody else will.” He says, “As long as you adhere to a street-level mentality, we’ll never get together and make progress as musicians.”

As much as young musicians need the union, he says the union also needs them. Moore has been on the AFM’s Diversity Council since its inception, and it’s something he is passionate about. “We’ve got to reach out to the young people because the future lies with us being able to get everybody to join—more young people, more African Americans, more women, more diversity,” he says. “I see a sea of aging white males at the [AFM] Convention. This is not what the future is going to look like; that’s not what musicians look like.”