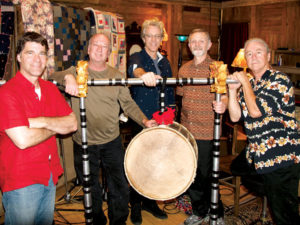 From the start of the project, Bryant, who has more than 20 years of experience in filmmaking, saw the potential for a documentary film. “We had three cameramen shooting throughout the process of meeting, rehearsing, organizing, restructuring, trips to Bali, and finally the concert itself,” he says.

During a 2013 interview, Copeland said one of the purposes of creating the film was to promote orchestral music. “I think this film will increase the awareness that orchestras can really do interesting stuff. There are new things coming out of the orchestra world that are exciting, that pump, that rock, and that are awesome.”

An initial version of Dare to Drum was funded through a successful Kickstarter campaign in September 2013. It premiered at the Dallas International Film Festival April 2015, and played a few other film festivals later that same year. “All along, the goal was to find a distributor for the film,” says Bryant.

Kino Lorber expressed interest in late 2015. “I knew they would be the company to go with because their catalog is full of highly artistic films of all genres. Dare to Drum is an unusual film because of the disparate and eclectic elements involved—rock star composer Stewart Copeland meets work percussion group D’Drum to create a work of Indonesian gamelan music within a symphony orchestra setting.”

The original Dare to Drum had only about a four-minute montage of the 2011 premiere. “Although Kino Lorber thought the 85-minute documentary was great on its own, they wanted to add the full 30-minute February 2011 concert performance to the package,” says Bryant.

More money was raised to edit, mix, and finish the concert film. In total, 348 people around the world contributed $95,142 to create the final film.

“The money also paid Dallas Symphony Orchestra musician fees as stipulated in the AFM’s Integrated Media Agreement,” says Bryant. “It took a while, but we successfully raised the additional funds. And with great help from AFM Director of Symphonic Electronic Media Debbie Newmark, we signed release agreements with the Dallas Symphony musicians. I am happy to report that we were able to pay nearly $20,000 to the musicians in fees and pension fund contributions.”

As of September 19, the film is available on DVD and for streaming and downloads on iTunes, Amazon, and through KinoLorber.com. It is also available for educational licensing through Estelle Grosso (egrosso@kinolorber.com).