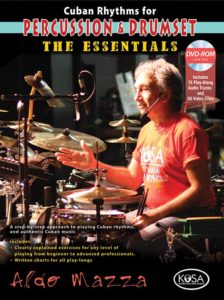 Local 406 (Montreal, PQ) percussionist Aldo Mazza wrote this method book from his 16 years of experience facilitating KoSA study programs in Cuba and working with many important Cuban drummers in developing rhythms. He presents popular, authentic rhythms along with conga “language” exercises to build sound and groove. The book comes with a disc of 75 play-along audio tracks and 30 video clips, plus, access to charts for two original songs composed and recorded in Havana by Cuban drummer Giraldo Piloto and his group Klimax.