Orchestra Musicians Connecting with The Communities Beyond the Symphony Halls

Connecting with the communities we serve has never been more important for orchestra musicians. In this article, we explore the activities musicians in several orchestras have undertaken to foster an authentic connection with their communities and to raise their profile as musicians and members of a collective. 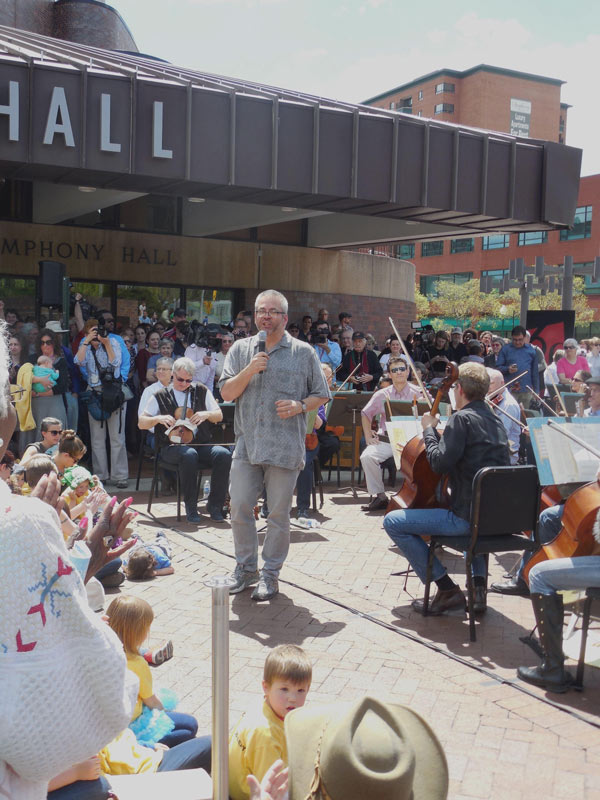 Baltimore Symphony Orchestra oboist Michael Lisicky, a member of Local 40-543 (Baltimore, MD) acts as emcee during a performance outside Joseph Meyerhoff Symphony Hall during the unrest following the death of Freddie Gray. 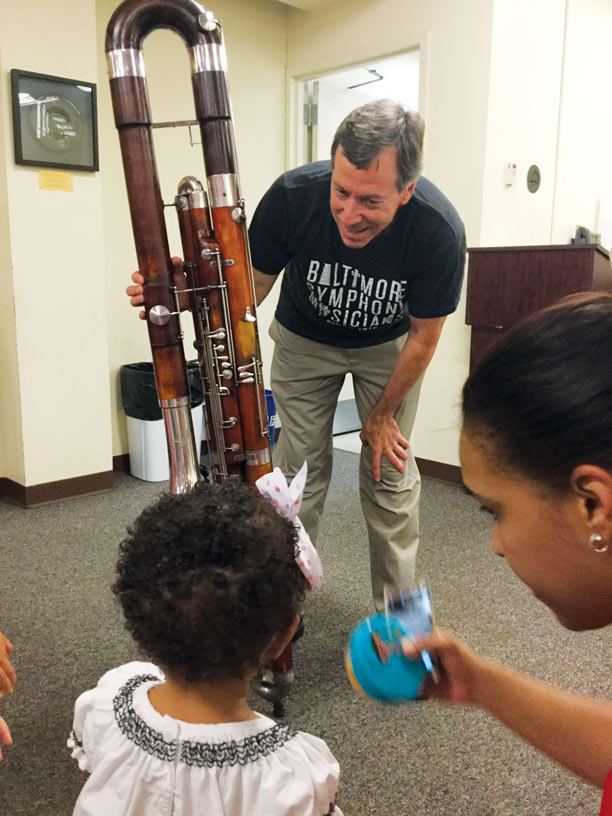 This month’s cover artist, Baltimore Symphony Orchestra (BSO) oboist Michael Lisicky has been a leader in BSO musician outreach efforts. Projects from the Local 40-543 (Baltimore, MD) members have ranged from “triage” performances, such as the one they gave during the unrest following the death of Freddie Gray, to program series at public libraries and local hospitals. They see these activities as providing opportunities to reach new audiences and connect with population that might not attend their concerts.

“Playing at the events Michael has put together over the past three years has been immensely satisfying for so many of us,” says BSO first violinist Greg Mulligan, who is also co-chair of the players committee and ICSOM member-at-large.

“This outreach connects Baltimore Symphony  Musicians directly and intimately with folks in our community,” he says. “Of course, it is also satisfying to perform in unusual places, in unusual ways, and to see the delight and gratitude on faces of people all over our region.”

He advises other musicians to think about who they would like to play music for—patients in hospitals, people at blood drives, schools, libraries, or maybe in response to a traumatic local or national/international event. “Think of these outreach activities as benefitting both your institution as a whole, and the group of musicians that makes up your orchestra.” 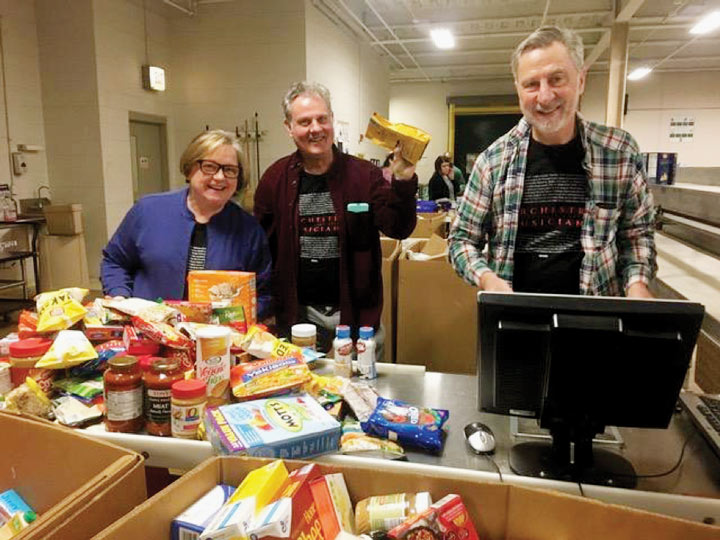 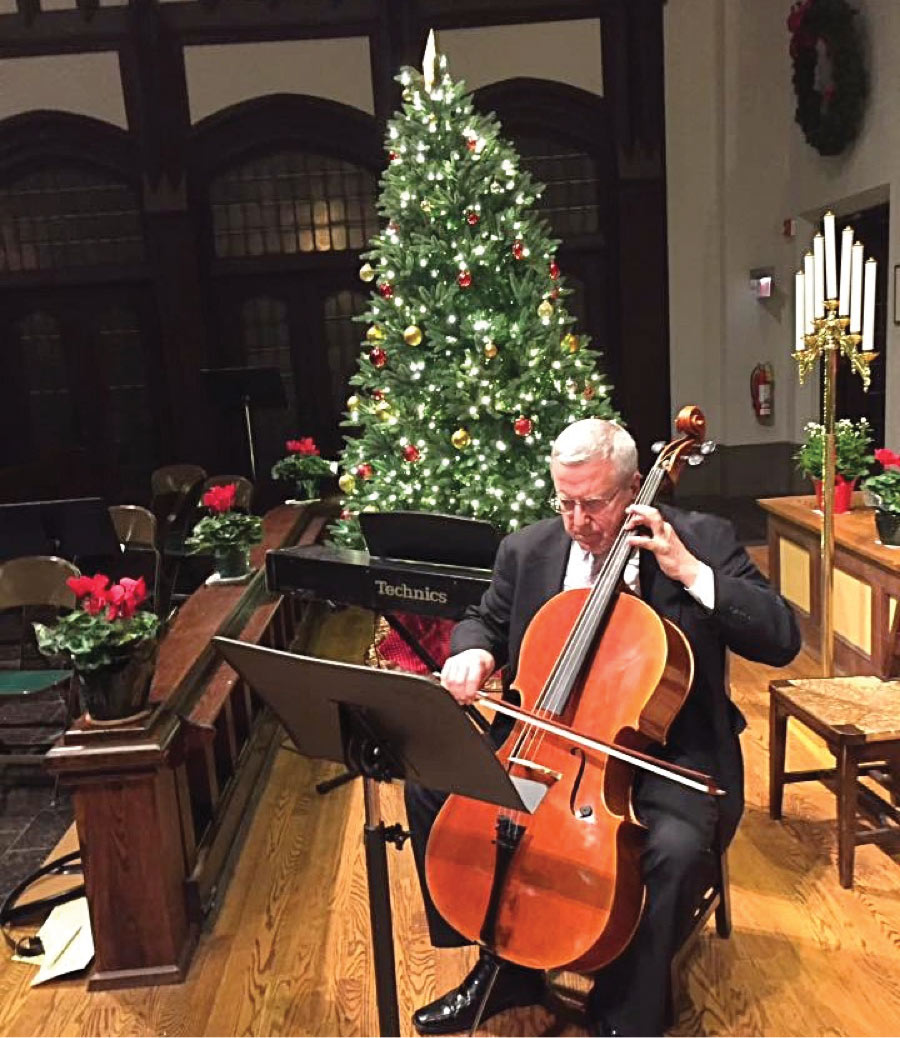 For Chicago Lyric Opera Orchestra musicians, members of Local 10-208 (Chicago, IL), Giving December is a way to show their gratitude and give back to the community during the busy holiday season. Among the 2017 events were: packing 11,846 meals for those in need; repurposing and gifting flower arrangements previously set to be discarded; and chamber music performances for people with little access to concerts, including Hollywood House senior living facility and Outside the Walls, an organization to support people recently released from incarceration.

“The reaction of the community has been overwhelmingly positive,” says Chicago Lyric Opera Orchestra Violist Melissa Kirk. “Bringing live music to people in an intimate setting is a wonderful experience for all involved. Many of us volunteer and give to charities throughout the year, but we were looking for a way to join together as an orchestral family to show gratitude and give back to the community.”

“We urged our musicians to organize chamber groups to perform for people who normally don’t get to experience the joy of live music,” says Kirk. “Giving December took on a life of its own to include pop-up performances around the city and extending past the month.”

“Community outreach is an excellent way to break down the barrier between audience and performer. The benefits flow in both directions: the community gets to know the musicians and the musicians get to interact with the community in a more personal way,” she says. “We form bonds with each other outside of the workplace, through the shared experience of helping those in need.” 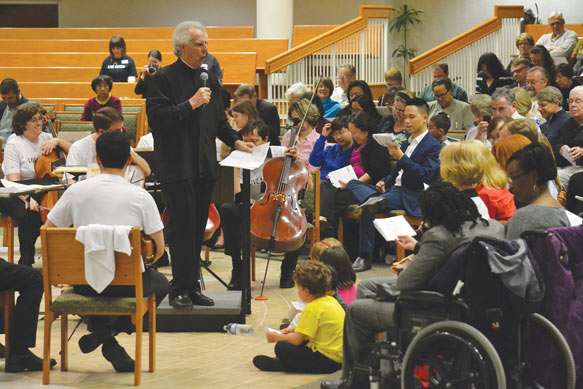 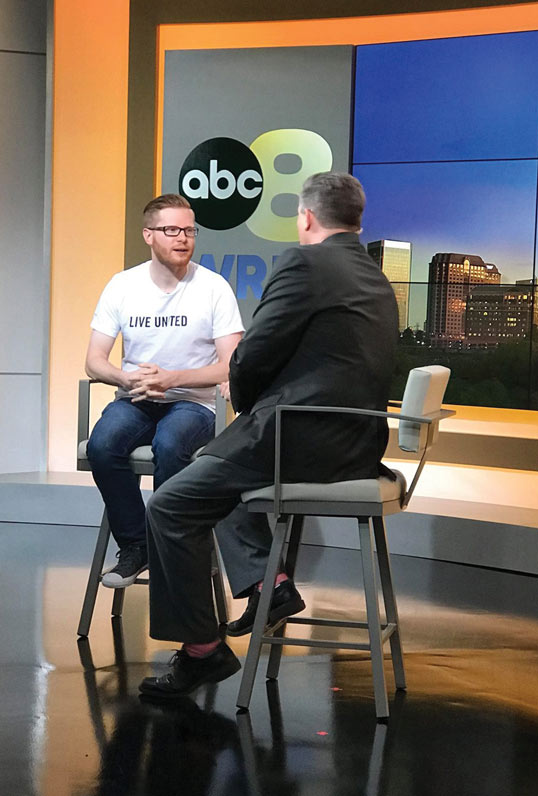 Symphony Musicians of Richmond (SMOR), members of Local 123 (Richmond, VA), put on an annual concert to benefit the United Way. Richmond Symphony Principal Bassoon Thomas Schneider says it got started in 2013 when SMOR reached out to the AFL-CIO Community Services Liaison C. B. Sinclair at United Way about partnering on a benefit concert.

“We decided that rather than have a black tie style fundraiser, we wanted to have a community focused event accessible to everyone; we were hoping to reach new audiences in the community. We especially wanted the concert to be accessible to fellow union members in the Richmond area, hoping the concert would help us build new relationships in the labor community,” he explains.

The first concert was a huge success, as was the s’more (SMOR) themed reception after the show. “Over the last five years the concert has continued to develop. The second year we branded the concert as ‘Music Unites.’ We tried charging money for tickets, but found that we got much better attendance and roughly the same revenue with a free concert,” says Schneider.

“Our venue for the concert is in the round; the audience members are all very close to the musicians and the sound. Musicians see the faces of the audience members as we perform. Connecting so profoundly with an audience through our art and helping United Way just feels right and is its own reward,” he says.

United Way is one of the only major charities that actively works with labor. They have also helped us get interviews in the press, explains Schneider. “I believe the concerts have significantly increased community awareness of our musician’s association. We want to build a reputation as good citizens in our community.”

“After some of our public engagement initiatives were scaled back or canceled, we felt that small scale, community-based concerts were the way to go,” says Metropolitan Opera (Met) Orchestra violist Mary Hammann. “I began searching for ways to do this. I was surprised by how quickly things fell into place.”

MET Orchestra Musicians, members of Local 802 (New York City), ended up establishing their own 501(c)(3) charity focused on community outreach. William Short, Met principal bassoon says, “We felt there were opportunities to become more involved in the community outside of Lincoln Center, to give back to underserved populations, and to expand awareness and appreciation of classical music.”

Among MET Orchestra Musicians projects have been recurring performances at local VA hospitals and facilities, as well as visits to local public schools and libraries. “Communities are both enormously appreciative of these efforts and fascinated by a peek into what musicians actually do. We think that presents an extraordinary opportunity to engage with people from all walks of life and shows that classical music, an authentic experience in an increasingly inauthentic world, is just as relevant as it has ever been,” he says.

The community reaction has been overwhelmingly positive, according to Hammann. “Our audiences are delighted to have such quality music in their libraries and schools. I see that the community is thirsty for this kind of musical sharing. On a personal level, it is heartening to see how powerful music is on this small community scale. I have gotten very positive feedback from audience members who were inspired (in countless ways) by our performance and also by meeting
us afterwards.” 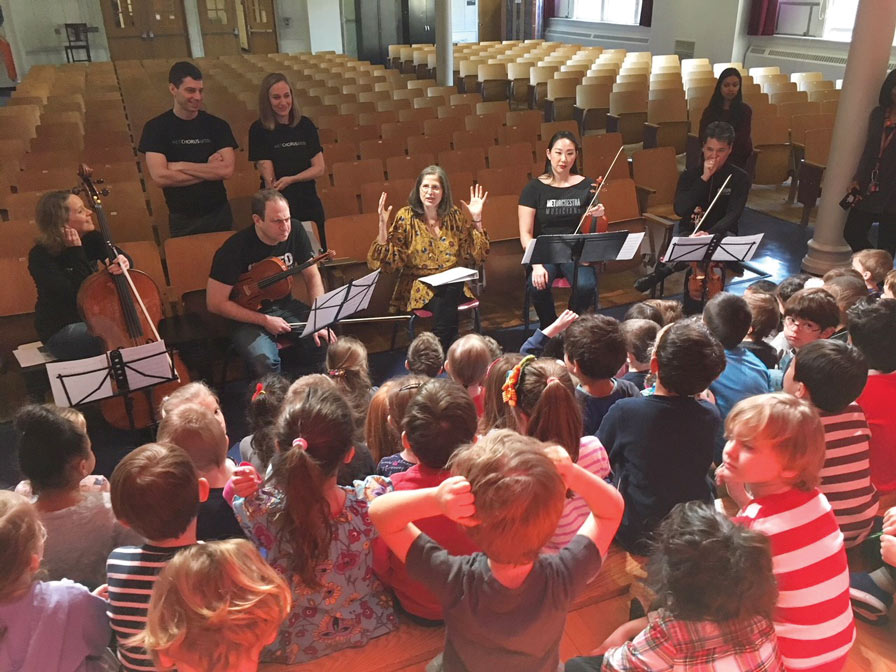 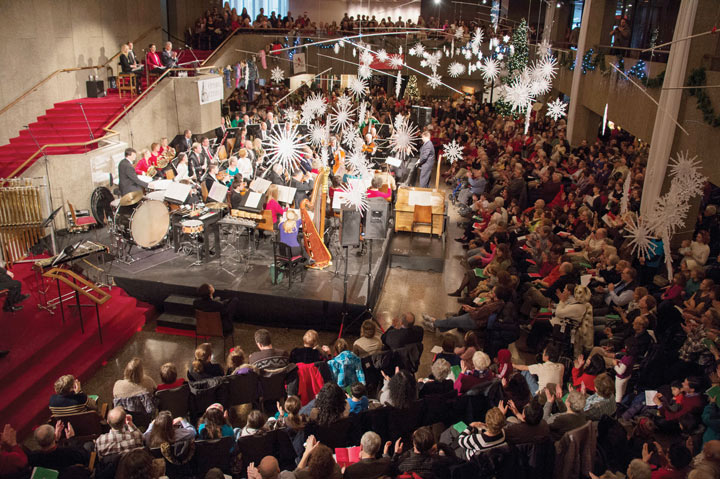 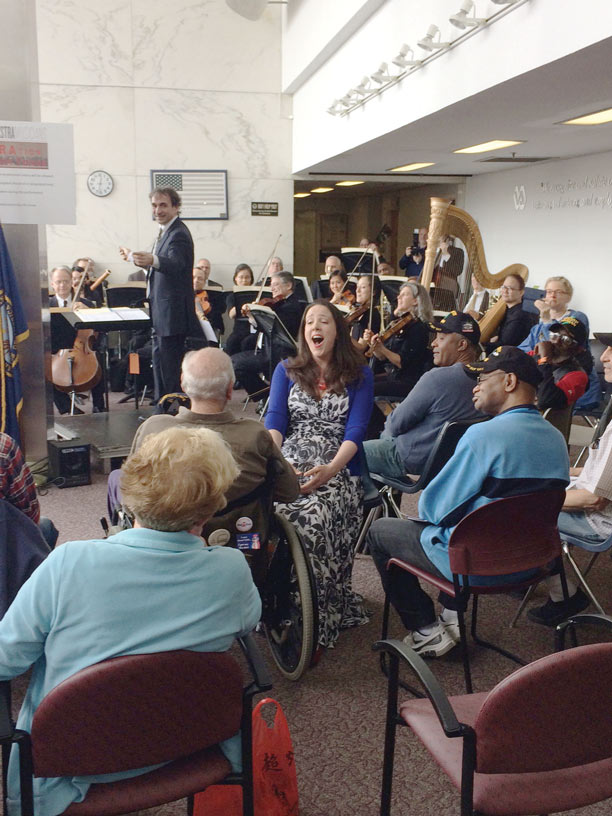 In Ottawa, the National Arts Centre (NAC) Orchestra musicians’ FanFair is an annual fundraising project organized by the members of Local 180 (Ottawa, ON). Other NACO outreach includes coaching young musicians, performing at senior residences and hospitals, as well as other fundraising performances.

“FanFair started during a dark time in our history. In October 1989, a rummage sale and silent auction were held to raise funds for an expected labour action,” says Assistant Principal Second Violin Winston Webber. “During the seven-week strike community support was fantastic. We were grateful, so we repeated the event the next Christmas season as a charity fundraiser and it just took off. It’s since raised more than $800,000 for two local charities—the Snowsuit Fund for children and the Ottawa Food Bank.”

“From the beginning, all labour for the FanFair concerts has been donated, including NAC facilities, light and sound systems, management time, publicity, musicians, and stagehands,” adds Webber. “The conductors are orchestra members. Incidental costs are paid from the orchestra musicians’ association operating funds, so 100% of donations go directly to the charities.”

“Community concerts remind us how important music is to people and how it can draw people together,” says Local 180 President and retired NACO second oboe and English horn Francine Schutzman. “FanFair is truly a moving event. In addition to FanFair itself, ‘elves’ from the orchestra go out into the lobby immediately after each performance in December to collect donations for our two charities.”

“One valuable result of FanFair has been the opportunity to get to know our supporters on a very personal level, and to generate new fans,” she adds.

“The NAC Orchestra has 40 educational and outreach programs for young people of all ages, adults, and teachers—it’s a top priority,” says Webber.

“We all know we should do outreach, and it does come back to us in various positive ways, like a higher public profile. But when you see the results on the ground, out in the so-called real world, then it really hits you how important this is to people. Our inspiration is the amazing work the charities do,” he says.