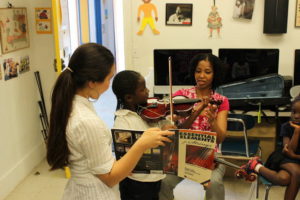 It isn’t exactly uncommon for an orchestra to help out in its community, but Cleveland Orchestra of local 4 (Cleveland, OH) goes the extra mile — or a thousand. On a trip to Florida to perform at Miami’s Arsht Center Cleveland Orchestra has developed a habit of visiting Barnyard, a nonprofit after-school center in Miami’s Coconut Grove neighborhood. The tradition remained intact as two musicians visited the program to share their music experiences with the class.

Violinist Isabel Trautwein and violist Eliesha Nelson took time out of their day on Tuesday to perform and teach to very eager elementary school-aged children. The two musicians performed numerous songs and then asked the children questions about what they heard.

“Each of you has a different way of hearing music. That’s the magic of music.” explained Trautwein who also founded a music training program back in Cleveland called El Sistema@Rainey.

Then they taught children with hands-on training as other children watched and learned. Even when the children were beginners they still were eager to learn. Learning proper hand positions and tips to stay in the right position is imperative among younger musicians. Learning the techniques now will ensure they continue to use them as they develop their music career, whether that is recreational or professional.

Diana Rosenberg, a Barnyard board member says it is this interaction that keeps the Cleveland Orchestra so loved in Florida.

“It gives [the students] something else to dream about,” she said. “You can see how important it is. I love the way that they’ve become a part of our community. It’s changed our lives.”