Musicians of the San Antonio Symphony continue their strike, pushing for a fair contract for 72 full-time musicians. The musicians, members of Local 23 (San Antonio, TX), went on strike September 27 in response to management’s imposed contract that reduced the number of full-time musicians and cut wages. They have rejected the symphony board’s last offer […] 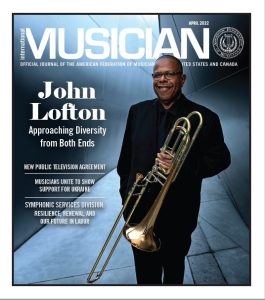 Members of Local 72-147 (Dallas-Ft. Worth, TX) held an informational leafleting on February 11, before the 8 p.m. performance of Casa Mañana’s production of Matilda: the Musical. Casa Mañana Theatre is in the hot seat for replacing musicians with prerecorded tracks for the mainstage production of Matilda, a violation of the Collective Bargaining Agreement (CBA) between the theater and Local 72-147. The union has […]

Major Texas unions, labor, and progressive groups gathered in San Antonio on February 18 to make noise for the Protecting the Right to Organize (PRO) Act and to deride its number one opponent in the US House, Congressman Henry Cuellar (TX-D), who has come under fire for his record of voting against the interests of […]

Toward the end of December, the Pittsburgh Symphony Orchestra (PSO) announced a significant expansion of its preprofessional fellowship for Black musicians. Since 2007, the program has selected a new musician every two years for performance opportunities and professional development training. Now, multiple musicians will be accepted and provided with more extensive developmental support. The program […]

The National Alliance for Audition Support (NAAS)—a partnership between the Sphinx Organization, New World Symphony, and the League of American Orchestras—has been awarded a grant of $1.95 million by The Andrew W. Mellon Foundation. Created in 2018, NAAS is an unprecedented national and field-wide initiative with the long-term goal of increasing diversity in American orchestras. […]

The Baltimore Symphony Musicians Foundation has launched a new program dedicated to teaching and mentoring young Black and Hispanic/Latinx students who are committed to study music. The Teaching and Mentoring Program for Orchestra (TEMPO) will pair students with Baltimore Symphony Orchestra (BSO) musicians to help students refine their skills and master the repertoire, while also […]

Springfield Symphony Orchestra Musicians Will Use Settlement to Stage Concerts

On January 4, the National Labor Relations Board (NLRB) announced a monetary settlement of $276,406 to resolve a complaint against the Springfield Symphony Orchestra (SSO). The organization violated federal labor law by breaching the terms of its last contract with SSO’s 71 musicians. The Orchestra Musicians’ Committee offered to drop all charges against SSO and […]