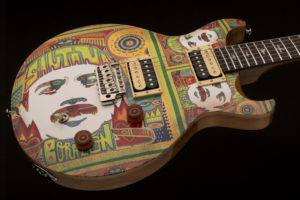 PRS Signature artist and AFM member Carlos Santana of Local 6 (San Francisco, CA) is holding a unique fundraising event at to benefit healthcare facilities serving two areas in Mexico. Through Santana’s nonprofit Milagro Foundation, funds will support the Santana Telehealth Project and benefit both the Santuario de Luz pediatric medical clinic in the town of Autlan, Mexico, and the Hospital Infantil de las Californias in Tijuana. Santana was born in Autlan and his family moved to Tijuana when he was a child.

“The Ultimate Experience with Carlos Santana” at the House of Blues is co-sponsored by PRS Guitars, the House of Blues, and Casa Noble Tequila. It includes a concert and private cocktail reception with Santana. Each couple attending with get an autographed, limited edition PRS “Corazon” SE Santana electric guitar, as well as enjoy luxury hotel accommodations and front and center seats for the show. Plus their names will be added to the Santana Telehealth Project donor wall in both medical facilities. A limited number of tickets, priced at $7,500 (couple) or $4,000 (individual), are available for the September 24 event.

Santana recently released Santana IV: Live At the House of Blues Las Vegas, available in DVD/CD and digital formats. This release captures the reunion of Santana’s band of the late ’60s and early ’70s. He has a series of shows lined up at the House of Blues.