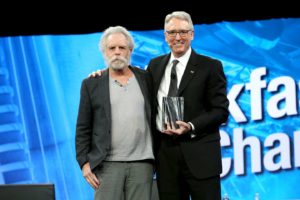 NAMM President and CEO Joe Lamond presented the award saying, “The Grateful Dead inspired a movement by taking incredible risks musically, culturally and in terms of how they approached the music business. They did so out of a passion for music making and, as a result, continue to inspire musicians to this day. We’re honored to present Bob Weir with the Music for Life Award for this his unabashed passion for music making, support for music education and so many more achievements in his long career.”

Weir offered a bit of creative wisdom for the audience of music professionals. “If you’re always going for it, the muse is always leading you in some direction. If you have faith in your muse, you’re going to get somewhere-if you put shoulder to the wheel. Every artist of any stripe is a storyteller, and the way you weave it together represents what makes life worth living.”

Past recipients of the Music for Life Award have included business leaders, public officials and musicians, including Stevie Wonder of Local 5 (Detroit, MI) and Henry Mancini. It is awarded each January during the global music products gathering, The NAMM Show.