Home » On the Cover » Bob Thompson

Though he grew up in New York City, pianist Bob Thompson of Local 136 (Charleston, WV) has called West Virginia home ever since his college years. He entered West Virginia State College as a trumpeter, but began playing piano seriously in order to play in the school’s jazz band, which already had a trumpet player. Last year his Mountain State roots were officially affirmed when he was inducted into the West Virginia Music Hall of Fame.

Since the 1970s, Thompson has led a series of bands, releasing a steady stream of jazz CDs and performing around the world. He’s also held a 23-year position as house pianist for National Public Radio’s Mountain Stage. Thompson’s history with the internationally broadcast show goes back to 1983, when he was a guest artist for the pilot. He returned frequently as a guest. In 1991, when the house pianist left, Thompson took over the job on a temporary basis. 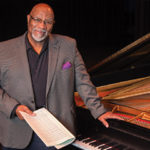 “I enjoy doing the show; it’s a lot of fun,” he says, explaining that the variety of music is one reason he’s stayed with it. “We have everything from Appalachian or bluegrass music to jazz to a lot of singer-songwriters, plus music from other parts of the world. Guests, for the most part, are people who are about to become well known on a national basis; many folks had their first appearance on Mountain Stage, and then, after that, you see them everywhere. Plus, a lot of established artists come back and continue to do the show.”

Among Thompson’s most memorable Mountain Stage moments, he recalls a special show with Hugh Masekela just after the 1994 election of South African President Nelson Mandela. “He had his band from South Africa with him and this was their first performance after the election. It turned into a celebration!” recalls Thompson. Other shows have had him sharing the stage with musicians like Courtney Pine, John Blake, Larry Coryell, and others.

Another project Thompson has been long involved with is co-production of the annual holiday jazz show, Joy to the World. Over its 20-plus-year run, what began as a small, local celebration, now includes three shows that are recorded and edited, then broadcast as a one-hour program on Public Radio and Voice of America.

“For a lot of people, it begins their Christmas season,” he says of the show covering holiday tunes that range from classic to obscure. “We try to give them a jazz treatment, but are careful not to take them too far from their roots.” Each year the show features a special guest singer. Among past guests are Fontella Bass, Catherine Russell of Local 802 (New York City), Mollie O’Brien, and Heather Masse of Local 1000 (Nongeographic).

Thompson first joined the union in 1964, about the same time he founded his first band, the Modern Jazz Interpreters. “It was real helpful to me, especially in my early days; it opened up a lot of avenues to me,” he says. “I grew up in New York City. There were so many great musicians in my neighborhood. I just wanted to be like them and I saw that union membership was very important to them.”
That first trio played the Notre Dame Jazz Festival in 1964; and toured Algeria, Nigeria, and Europe. From the 1970s through the 1980s, Thompson released a series of acclaimed contemporary jazz albums. 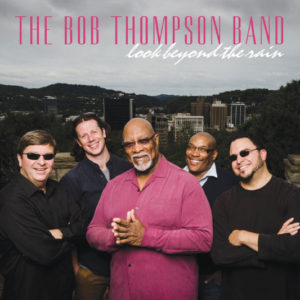 When Thompson and his current band, The Bob Thompson Band, set out to create his latest CD, Look Beyond the Rain, it was a new direction and their first release with vocals. The project has an uplifting message. “It’s going to rain in your life,” he says. “You have to look beyond the rain because there are better times coming.”
Among the hopeful tunes, “You Are a Traveler,” written and sung by Thompson, is about enjoying where you are today in life, he explains. “It’s about the journey, enjoying every day and the process.”

The CD’s opening tune, “Time to Be One,” is about the division that continues to develop in the country, he explains. “It is discouraging and I wondered what I could do about it. All we can do is play music, and I think, as musicians and artists, we need to try to bring people together with music.”

The CD is just the latest project for the group of musicians, all members of Local 136, who have played together for a number of years. Thompson first played with saxophonist Doug Payne in the 1980s; 41-year-old drummer Tim Courts has been with Thompson since he was 20 years old; guitarist Ryan Kennedy has played with Thompson ever since graduating from Berklee 12 years ago, and the “newest” band member, 31-year-old bassist John Inghram, has been in Thompson’s band for around 10 years.

“It’s more like we are a little family. One thing I enjoy about the band is its diversity in terms of ages; everybody brings something different to the table,” says Thompson.

Even with all his performances, Thompson takes time to pass on his knowledge to the next generation. He explains that, for him, the rewards of teaching are two-fold: “In order to teach somebody, you have to crystallize things in your mind; I always learn something from teaching. The other thing is that, when I started out, a lot of people gave me help along the way. So I feel like I’m just passing that along. If we don’t teach and give to other people, the music is going to die.”

He says that, as a young player he got some valuable advice from Henry Jerome. Early in his career, Thompson used some New York music connections to set up an appointment with the then-president of United Artists. He brought a tape of some music he’d recorded. Jerome said that he liked the music, and invited him to come again, but also said, “When you do come back, bring something that, if I want to put it out, I have to have you to do it.”

At first, Thompson found the advice discouraging. “Then I realized that he was trying to tell me, ‘be yourself, do something unique, make it your own,’” says Thompson. “I think that’s one of the best pieces of advice I got from anybody in the music business.”

Today, Thompson advises students along those same lines. “Try to figure out how to create your own career. Often people who go into music have stars in their eyes, thinking they are going to be big musical stars. It’s really about every day being the best you can be and trying to figure out, economically, how you can make it work,” he says.

“Go somewhere where there is no music being played and try to create a situation there for yourself. That allows you to build your own audience. Also, have some purpose for what you are doing. It’s not all about the money; it’s about what you are doing and what you are giving to people,” he says.