Success Could Be Just One Gig Away

It’s not always easy. We all have bad days, sometimes bad weeks. Maybe the gigs aren’t coming in as fast as you want. Maybe your calendar is full, but the gigs suck. Maybe you feel your career should be at a higher level, but you’re still stuck playing for just over scale at a place […]

The National Association of Music Merchants (NAMM) held its summer show for the sixth year at Nashville’s Music City Center in July. NAMM is comprised of 9,200 member companies in 99 countries. It’s no small venue, and there were almost 450 exhibitors. There were more than 1,500 brands of instruments and accessories, and talent beyond belief. […]

Are Your E-mails Brief and to the Point?

I know how it goes. You get a lead on a club gig, a corporate event, or a wedding, and one of the first things you do is get an e-mail address and send a note to see if the person is really interested and if you should pursue it further. But hold on for […]

Does Your Demo Video Make an Impact

I try to help union musicians get more work in any way I can. Years ago, an AFM member would send me a demo CD to listen to and ask if I could possibly pass it along. Then that CD changed to a demo DVD, where agents, promoters, or anyone looking to book a group […]

How Did Your Last Gig Go?

There’s no end to the ways you can make money playing a musical instrument. Getting paid really well, however, is a little more tricky. You’re a professional musician. You belong to the AFM. You spent a long time learning your trade. Your paycheck for playing should reflect your qualifications. It’s one thing just to wait […]

What Are You Doing Today to Help Your Career Tomorrow?

I found an interesting book, that has been out of print for some time, in a secondhand bookstore the other day. It’s called “You Can’t Afford the Luxury of a Negative Thought.”

Tough Times, or Is It Attitude?

Probably not a week goes by, where someone doesn’t tell me about how things are “getting tough.” Business has changed over the years. Weddings are using DJs, clubs aren’t booking singles or groups, shows are using more recorded music, and a lot of the gigs we used to play are nonexistent. Many bars want musicians […] 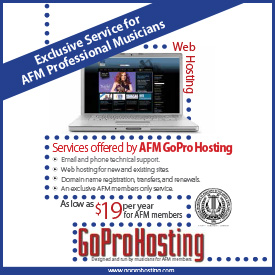