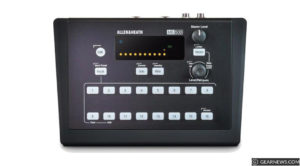 The Allen & Heath ME-500 Personal Mixer is a 16-channel complement to the existing 40-channel ME-1. It allows musicians to quickly and independently build and control their own monitor mix through simple setup and controls. ME-500 is plug ‘n’ play compatible with digital consoles via the ME-U hub. The mixer features crisp, dimmable display, backlit select keys, mute and solo buttons, master level with limiter and EQ, and a single rotary encoder for all main navigation and control. Outputs include mini-jack, quarter-inch headphone jack, and TRS mono for wedge monitors. Secure EtherCon connectors allow multiple ME-500s to be daisy-chained or deployed in a star topology. ME-500 can store eight user presets and also save them to a USB drive.