Home » On the Cover » Al Jarreau: Ceaseless Creator of Fresh Sounds in Music 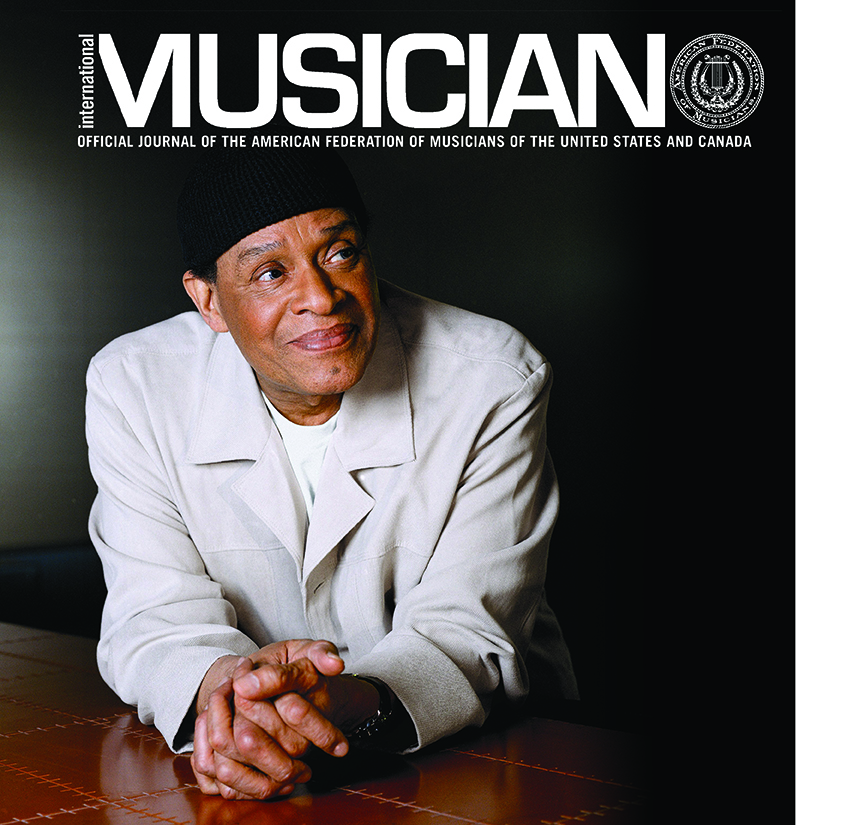 Al Jarreau’s innovative vocal style and vibrant personality have earned him wide appeal and Grammy Awards in three different genres of music: jazz, pop, and R&B. Talking to the Local 47 (Los Angeles, CA) member, you quickly discover that he is an exuberant musician, grateful for his success and accomplishments, but ready to tackle more challenges. At 74, his mind is far from retirement as he talks about the many projects that lie ahead.

Jarreau says he couldn’t help but sing because there was music everywhere growing up. His mom was a church pianist and his father a singer who also played the musical saw. The eight members of his Milwaukee-based family often put on fundraising musicals. “At age 12, I was singing harmonies on the street corner while walking to school in the morning,” he says, recalling how he’d meet up with classmates and sing. “We were singing doo-wop, before it was called doo-wop. Singing was part of living and breathing.”

When he was a little older, Jarreau sought out opportunities to sing, often with groups whose members were 10 or 15 years older than him. It was back in those days that he first joined the AFM. “I’m a union guy,” he says. “Unions are very important in the struggle for the middle class, and they helped to make and build the middle class that everyone on the planet wanted to be like.”

When it came time for college, Jarreau surprisingly went in another direction, earning a four-year liberal arts degree in psychology and a master’s degree in rehabilitation counseling. “I did not want to study music because I was getting to be a pretty evolved, mature singer. People were listening to me. I didn’t want to study what I was already doing,” he says.

Following college, music was on his mind when he found a job as a rehabilitation counselor in San Francisco, a city he chose for its burgeoning music industry. “There was this huge group of singers and performers coming out of the Bay area—Janis Joplin, Jefferson Airplane, The Grateful Dead. Of course, Haight-Ashbury and Berkeley were the impetus for this new revolution in thinking and music,” he says. “I walked to work in the morning right past Haight-Ashbury.”

In 1965, Jarreau met keyboardist George Duke at the neighborhood club Half/Note. “He was doing matinees on Sundays and all the local musicians were coming in to play with this brilliant young jazz piano player,” says Jarreau. He dropped in one Sunday and sang with Duke and the club owner asked if he’d like to sing with him regularly. “George and I held fort a couple nights a week at the Half Note.”

He credits Duke with teaching him how to swing. “George was one of the swingingest keyboard players that has ever touched the keyboard. I went to ‘Duke university’ to study swing!” laughs Jarreau. According to Jarreau, it was his work with Duke that finally made him decide to jump into a full-time music career, “sink or swim.”

Though the two only played together for three years, they remained lifelong friends. In 2011, they released Al Jarreau and the George Duke Trio: Love at the Half/Note 1965, Volume 1, created from tapes Duke had made of their days playing together. According to Jarreau, there’s enough material for a second album.

Sadly, Duke passed away in 2013. Jarreau’s next release, June 17, is a tribute to Duke. “We selected some things that were kind of places where George and I crossed paths,” he says of the album of 11 songs, which also features Stanley Clark, among others. “Stanley and George were joined at the hip. They wrote and made beautiful music together. He produced five songs for the album, including ‘Brazilian Love Affair’ and ‘Sweet Baby’.”

After his work with Duke, Jarreau launched into what he refers to as the next most important period in the development of his unique vocal style. “I found this guitar player, Julio Martinez, and he and I became a duo,” says Jarreau, who began to feed his “insane craving” to explore Brazilian music. “Brazilian rhythms have a backbeat and you could turn R&B-ish in Brazilian music. They cross paths—one has a backbeat and the other has brilliant syncopations. That became my thumbprint and signature.”

This eventually became something called beatbox, adds Jarreau. “A whole bunch of young people are doing that now. Ain’t that wonderful?”

Jarreau and Martinez started writing together, creating his first record: We Got By. “The song ‘We Got By’ was one of the first songs I wrote for myself,” says Jarreau. “That record was followed by others and pretty soon I was traveling Europe and Japan, and having a wonderful, dream-come-true kind of career. It was fantastic!”

Around the same time, Jarreau began performing as a duo with a piano player. “You’ve got a keyboard player with 10 fingers to create chords and rhythms, and me singing and playing cabasa and making the bass drum on the base of the mic,” says Jarreau, who dropped hints that he may be working on a new project that will bring him back to this early configuration. “There’s something in that that’s really basic and that I’d kind of like to review again and let people hear where I came from.”

Always exploring new possibilities, this simplistic setup is almost the opposite of his last release: Al Jarreau and the Metropole Orkest Live (2012), recorded with a 53-piece orchestra from the Netherlands, led by Local 47 member Vince Mendoza.

“They invited me to come and have several dates with them that we recorded. As you can imagine, strings change everything,” he says, describing the experience. “You have this typical symphony orchestra, and sitting inside there is a rhythm section composed of a jazz piano player, a jazz bass player, a jazzy guitar player, and a drummer. So you have all of this ability to create music that covers the gamut.”

No matter who is onstage with Jarreau, he is a charismatic and gracious performer who manages to deliver an energetic and unique show every time. He says that the key is to get the audience involved in the performance.

“Find something that they can sing with you,” he says. “It becomes something else when people join in and get involved in the music. I love that kind of communication, and talking to people in the audience and feeling it together. Something happens when that occurs and people go home with that experience.”

And, likewise, the audience carries him through the concert and helps him make it fresh and different each night, says the entertainer who seems to genuinely love his audience.

“The situation is different because there is someone in the balcony, just to my left that I can see and say ‘Hi’ to. That didn’t happen last night, and if you share that with your audience, it changes you. You sing the song differently. That changes the musicians and how they play. That makes a new night. I’m inspired by that and allowing that to happen,” Jarreau says.

As for how he stays energetic on stage, he explains: “The music keeps you young, and because you want to do the music you stay young. They play into each others’ hands. There’s something in the creative process—making music or anything where there was nothing a moment ago because you expressed yourself. It is a refreshing, invigorating experience that I encourage everyone to have. It doesn’t have to be something that we consider an art form—rearrange the furniture, plant some seeds and watch your work become a flower. That’s the creative experience.”

“That process is youthful, it’s restorative, it’s healing, it’s inspiring,” he says. “I walk offstage, and I know I’m healed in some kind of way. And I know there are people in the audience who will walk away from the show feeling the same way.”