AFM Year in Review: Highlights from 2016 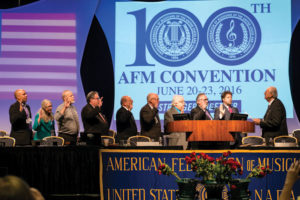 This December caps off another busy year for the AFM. In addition to a number of key negotiations and lobbying for legislation beneficial to our members, 2016 marked the historic 100th AFM Convention, held in June.

This convention will be remembered, not only for its historical significance, but also for the forward-thinking agenda the AFM put forth. Delegates walked away with renewed faith of what could be accomplished together. AFM President Ray Hair’s “team unity” now includes newly elected board member John Acosta, president of Local 47 (Los Angeles, CA), as Vince Trombetta stepped down from the IEB. Jay Blumenthal, previously Symphonic Services director, replaced Sam Folio as the AFM’s secretary-treasurer.

Among the nine recommendations and 22 resolutions debated at the convention, Resolution 20—“Extras and Subs in Orchestras”—held historic significance. It addressed the disparity in wages and working conditions for substitute and extra musicians in many collective bargaining agreements. An amended resolution established a new provision in the section of the AFM Bylaws “… musicians who work for full-time orchestral employers and their locals are urged to negotiate and/or maintain parity in wages and benefits for substitute and extra musicians performing with those orchestras.” 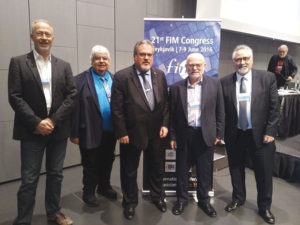 The AFM made a commitment to continuing its participation as a nongovernmental organization in the activities of World Intellectual Properties Organization (WIPO). In January, AFM In-House Counsel Jennifer Garner reported on her representation of the AFM at the December 2015 session of the WIPO’s Standing Committee on Copyright and Related Rights in Geneva. The AFM took the lead in opening the discussion of fairness in digital streaming and the diversity of national laws on copyright.

The International Federation of Musicians (FIM) held its 21st Congress in Reykjavik, Iceland, June 7-9. Vice President from Canada Alan Willaert, International Executive Board member Tino Gagliardi, and International Vice President Bruce Fife represented the AFM at FIM. Of particular interest to the AFM was achieving a more representative voice within the leadership of FIM. To that end, AFM President Ray Hair was elected to the Presidium, the highest executive body of FIM, and Canada gained a seat on the FIM Executive Committee.

Working with our coalition partners, for the past 10 years the AFM has lobbied for protections for musicians traveling internationally with musical instruments. Working with the US Department of the Interior and with the US Fish and Wildlife Service (USFWS), a federal Musical Instrument Passport was introduced. It is specific to the needs of professional musicians traveling with instruments containing CITES related materials. The passport allows musicians to easily travel multiple times in and out of the US with their affected instruments.

The AFM has developed two manuals to support traveling AFM members: A Guide to Traveling with Musical Instruments and a pocket-sized handbook, developed in cooperation with the Carry-on Coalition. Both can be found on the AFM.org website. 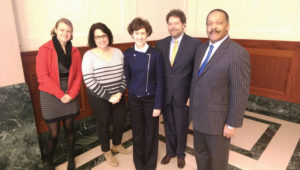 The Obama Administration stepped up federal monitoring of employers who hire union-busting consultants. The new rule requires employers to report the use of consultants and their tactics, regardless of direct engagement with employees.

The death of Justice Antonin Scalia meant a number of rulings were in flux, including Friedrichs v. California Teachers Association (CTA), which attacks the funding model of public-sector unions. A vacancy on the bench meant that the Court’s ruling was a tie and the law reverted back to a past decision in the lower court, which was in the union’s favor.

In 2016, the AFM supported the creation of specific programs to help entrepreneurs in the arts. In March, the Comprehensive Resources for Entrepreneurs in the Arts to Transform the Economy Act of 2016 (the CREATE Act) included a host of new arts-related tax proposals, in addition to arts-related proposal expansions into federal programs. Ray Hair and Alfonso Pollard committed to help members look for expanded opportunities with the federal government. The National Endowment for the Arts, the Smithsonian Institution, and the US Department of State  made commitments to include the AFM in their deliberations.

The AFM National Legislative Office continues to work with members of Congress to reform tax extender legislation focused on the film industry, while Local 47 officers and members have successfully lobbied for new state tax credit legislation designed to close loopholes in current law. AB 1199 introduced language that would require a specified amount of the total expenditures relating to music post-production be done in California, in order for a production to qualify for an added rebate. Musicians are optimistic that further development of the bill will improve upon the existing tax credit program as it relates to music scoring.

As a member of the musicFIRST Coalition, the AFM worked tirelessly with nationally recognized performance rights organizations toward passage of the Fair Play Fair Pay Act of 2015. It would establish a new benchmark in the protection of rights for creators whose sound recordings are performed on AM/FM terrestrial radio. In May, more than 40 artists flew into the nation’s capital to advocate their support of this vital piece of legislation before members of Congress. Thousands of artists from around the world, including AFM featured artists and backup musicians, could  benefit from this legislation. 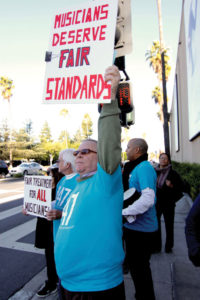 Members of AFM Local 47 (Los Angeles, CA) and other supporting unions such as UNITE HERE!, demonstrated and leafleted in front of Warner Bros. after discovering evidence of a “dark”
scoring session.

December 2015 saw more than 50 AFM Local 47 (Los Angeles, CA) members, workers from other unions, and supporters demonstrate outside Warner Bros. against the exploitation of musicians. The group protested nonunion activity on the studio property by permitting a “dark” date by Cinema Scoring, an employer with whom AFM Local 47 has a labor dispute. News of the dark scoring session prompted swift reaction and support from the union’s labor community allies.

June 1 saw the ratification of an AFM agreement with representatives of public television employers, including WGBH, WETA, WTTW, Austin City Limits, Sesame Workshop, and Thirteen Productions for a successor National Public Television Agreement. Aside from significant wage increases, highlights include provisions that govern the use of new media that requires signatory public television employers to share with musicians the revenue they receive from certain forms of new media exploitation and a groundbreaking clip use formula. The agreement extends three years through May 31, 2019.

During the summer, negotiations began with representatives of ABC, CBS, and NBC for a new Television Videotape Agreement. Shortly after the conclusion of that initial round of negotiations, the AFM presented the networks with a comprehensive information request that will greatly assist the Federation with future meetings. In addition, negotiations continued with the major record companies for a new Sound Recording Labor Agreement (SRLA). The major focus in these negotiations has been on the licensing of sound recordings in theatrical motion pictures and television films, as well as streaming of SRLA content.

An agreement was reached with the producers of the Amazon original series Transparent to cover musicians, arrangers, orchestrators, copyists and conductors guaranteeing them fair compensation and protections. Producers at Pictrow swiftly agreed to sign onto The Made for New Media Productions Sideletter of the Basic Television Motion Picture Agreement after musicians from Local 47 spoke publicly and demonstrated. Unlike the show’s actors, writers, director, and crew, musicians were not originally covered under a union contract.

Among theatre triumphs this year, the NLRB ruled to allow a union election at the Wang Theatre. Two separate employers for The Legend of Zelda—Symphony of the Goddesses agreed to file proper union contracts for their productions after having been placed on the AFM’s “Unfair List.”

This year, the AFM and the Broadway League/Disney Theatrical Productions negotiated successor agreements to Pamphlet B and the Short Engagement Touring Theatrical Musicals (SET) Agreement. The new agreements include improvements that recognize the value the players bring to touring musical theatre productions. You can read more about this agreement in Ray Hair’s column on page 2 of this issue.

After a nine-year battle, the Lancaster Symphony Musicians, members of Local 294, supported by the AFM, won the right to organize. In May, the decision let stand an earlier ruling by the National Labor Relations Board (NLRB) finding that the musicians are employees and therefore eligible to organize. While symphony management contended the musicians were independent contractors, the judge noted that the symphony “regulates virtually all aspects of the musicians’ performance.”

Other orchestras signed positive agreements, sometimes restoring pay and benefits lost in earlier concessions. In April, the musicians of the Nashville Symphony Orchestra, members of Local 257, ratified a two-year contract reopener, three months ahead of schedule, that provides raises in the 2016-2017 and 2017-2018 seasons, returning salaries to 2013 levels by early 2018.

Unfortunately, musicians of the Hartford Symphony Orchestra, members of Local  400, accepted wage concessions to save their orchestra after management threatened a shut-down. A two-day strike canceled The Philadelphia Orchestra’s season-opening gala, but a new agreement was reached that made inroads in restoring some concessions made by musicians after the orchestra’s bankruptcy in 2012. Grant Park Orchestra also briefly went on strike before signing a new agreement.