AFM Locals Prepare the Next Generation 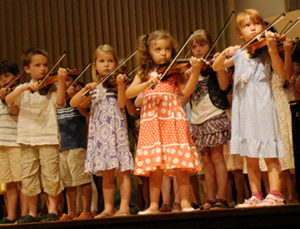 Music shares a fundamentally important trait with many other professions: education is one of the cornerstones in building a secure future. The main thrust of education is three-fold: fostering music education in budding musicians; enouraging interest and awareness in music among the general public to keep the art form alive and vital; and helping new and established musicians learn to cope with the sometimes confusing business and legal aspects of making music.

AFM Locals Prepare the Next Generation

AFM local offices around the country realize the importance of all of these elements, and take an active role in promoting education in schools, neighborhoods, and performing venues through programs of their own, or working in partnership with area symphony orchestras and educators. Following is a brief look at what just a few locals are accomplishing in their communities, building bridges and educating the public through their hard work and dedication.

Since 2002, Local 6 has been running workshops designed to help performers cope with the business side of their art. Local 6 Assistant to the President Alex Walsh is responsible for organizing the sessions which, according to Secretary Gretchen Elliott, fulfill a vital function in terms of providing career advice and networking for many Bay Area musicians who work as individual performers or in groups for whom the collective bargaining process is not a practical option. “We may not be able to organize these musicians, but we can help guide them smoothly through the process of developing their careers in a productive way,” explains Elliot. “The workshops are also aimed at union members and non-members alike, so participants can see how the union operates and how it can help them,” she says.

Walsh strives to organize at least one workshop every month. Workshops are held in the Local 6 union hall and always allow time for specific questions and answers. The latest installment, held August 24, was entitled “The (Press & Booking) Package.” It discussed the similarities and differences between a booking package and a press package and outlined the differences between what individuals–bookers or press people–may be looking for in each. Topics included the “must haves” in any package, such as what to include in to increase your attractiveness to contractors and the press; whether to send a demo or a professional recording; how many tracks to provide; what the press wants in a photo; and how to write a bio. The Local 6 newsletter also carries regular articles on career development. Simon Salz, of Local 655 (Miami, FL) plays with a group of young musicians at the Frost School of Music summer camp.

Increasingly the trend in youth summer camps is to extend education beyond the end of the school year, providing an ideal opportunity to prove to young people that learning is fun. In that spirit, this summer’s Young Musicians Camp at the Frost School of Music, University of Miami teamed up with Local 655.

In addition to music instruction, students got to jam with Local 655 members Ira Sullivan, Phil Strange, Joe Donato, and Huifang Chen, among others. “We feel so fortunate that these great artists are willing to work with our young people at the camp,” writes Director Sarah Neham Salz on the Local 655 Web site (www.afm655.org). “During most of the year these musicians are busy performing, traveling, or teaching college students. They were so excited when I offered them this opportunity.”

Co-director Simon Salz (Local 655) reports that the students enjoyed the experience of playing with professionals. “They’re still talking about it,” he says. “We wanted to hire the most professional musicians we could. Local 655’s Web site helped with this, and I also used it to send out a call for teachers to staff the camp’s new private tutorial component.” Local 136 shows how Web sites can be used to provide a music education resource for members and the community. “Flying in the face of documented evidence that music education sharpens critical thinking skills, music programs are being slashed coast to coast,” notes the local’s Web site (www.afm136.org). “Working with area musicians has become a big focus for us through the committee,” says the local’s president, Brad Bradley. “We’ve worked to establish artist residency programs at schools. Those schools that can’t afford to bring their students to the Clay Performing Arts Center in Charleston, for performances of the West Virginia Symphony or music classes, are also provided sponsorship.”

The committee also organizes a series of seminars for its musicians on ways to succeed in the music business. The local cosponsors the West Virginia Music Showcase in conjunction with a private music store, providing further opportunities for seminars. The Local 136 Web site posts tips and links about the music business. Currently posted are links to the AFM’s free music software page and the music business tips page from the Nashville New Music Conference Web site.

The aim of the Young Musicians Project (YMP) is to help talented students take their first steps toward a professional career. For Local 689, becoming professional means, firstly, being able to perform well at public events. To this end, the YMP has initiated a series of “Young Musicians Concerts” in various locations in Eugene throughout summer and early fall. But just as important a lesson for young musicians to learn is that they deserve to be paid for their work. “Musicians are often asked to provide free entertainment, in spite of their long and costly training,” explains the Local 689 Web site (www.afm689.org). “Yet musicians have bills to pay, and other professionals don’t work for free. Musicians have to learn this lesson early on.” As part of its mission, therefore, Local 689, along with YMP cosponsor the Music Performance Trust Fund, pays the young musicians scale wages, while the concerts remain free and open to the public.

The latest YMP concert took place on the July 4 weekend and was well-attended, according to Local 689 Secretary Violetta Tarpinian. She explains that Local 689 doesn’t use YMP for direct recruitment; rather, it advertises the union as one of the essential tools a young musician should have. “Most of the musicians haven’t heard of the union,” says Tarpinian. “But we leave a good impression, and they’ll keep the union in mind in a good way.”

The Web site of Local 99’s Musician Education Assistance Project (MEAP) describes the importance of music in schools. “It has been proven that music promotes development skills that cross over into other areas of students’ lives, teaching valuable language skills, promoting physical dexterity, and developing higher brain function,” the site (www.afm99.org) explains. “However, music education is in jeopardy due to shrinking budgets and legislation that has severely cut or canceled music education programs in the schools.”

Taking the bull by the horns, Local 99 formed the nonprofit MEAP in 1997. The aim of the program is to raise and disperse funds to increase music education opportunities for students in elementary and high schools in northern Oregon and southwest Washington. MEAP programs include private instruction scholarships for students aged eight to 11; master class coaching sessions by professional musicians; a lecture series hosted by Local 99 members; in-school performances by professional ensembles; and public fundraising events held yearly to support the MEAP’s mission.