This high-caliber, highly publicized event saw labor and creative talent, including the AFM, the International Alliance of Theatrical Stage Employees (IATSE), and Screen Actors Guild-American Federation of Television and Radio Artists (SAG-AFTRA), join forces with industry leaders such as The Walt Disney Company, NBC Universal, 21st Century Fox, Viacom, Sony Pictures Entertainment, Deluxe Entertainment, Creative Future, and Warner Bros. Entertainment, Inc. to educate lawmakers and staff from the House and Senate about the intricacies of film and television production.  The Federation was the only film scoring organization participating in the event. 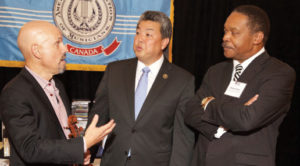 With support from AFM International President Ray Hair and members of the AFM International Executive Board, our team showcased hundreds of current and legacy television and film recording works created by AFM musicians across the country, including in Los Angeles, New York City, and Nashville.

The AFM booth was staffed by me, Recording Musicians Association (RMA) President Marc Sazer, Local 802 (New York City) Executive Board and RMA-New York member Gail Kruvand, and Local 161-710 (Washington, DC) President Edguardo Malaga. Throughout the event, Sazer performed a medley of themes from past and present American films. He was well received and praised for the high caliber of his solo violin performance. 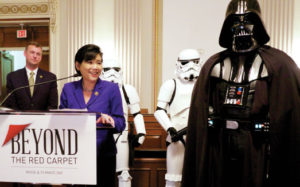 Our primary mission was to clearly define the highly technical skill level that AFM musicians exhibit daily in the studios. Many of them achieve a middle class living through this work while also reaching out and contributing technical and artistic support to their respective music communities.  Even more important, members of congress now clearly understand that it is the talent and commitment to high industry standards set by AFM recording musicians that help bring thousands of films and memorable television shows to life. Memories of films, both on the big and small screens, are often manifested in the remarkable music that supports the acting and behind-the-scenes technical skills.

The MPAA notes that the American film industry helps generate and support more than 1.9 million jobs in the US. AFM President Hair notes, “The American film and television industries are second to none and lead the way in all international markets.  AFM musicians provide the talent that helps assure the success and longevity of American film and television product. We continue to challenge federal and state legislators and industry professionals to push for strong recognition of AFM member achievements in post-production work here in the US.”

We look forward to our work in Washington, DC, as we help bring the skills and commitment of professional musicians in television and film to the attention of policy makers tasked with making decisions that bring value and longevity of our industry.