For the past 10 years, the AFM has worked diligently with its US Convention on International Trade in Endangered Species of Wild Fauna and Flora (CITES) Coalition partners and the US Fish and Wildlife Service (USFWS) to protect and conserve endangered species, while helping guarantee the legal ownership, use, import-export, and value of musical instruments that contain CITES related materials. Our coalition’s work with the US Department of the Interior, USFWS, Department of Agriculture, and Department of Homeland Security, along with a range of international organizations, such as the International Federation of Musicians (FIM), has led to significant harmonization of both protective language for musical instruments in new USFWS regulations and global harmonization for cross-border movement of musical instruments within management authorities around the world.

As outlined on its website (cites.org), CITES is an international agreement among governments. Its aim is to ensure that international trade in specimens of wild animals and plants does not threaten their survival. 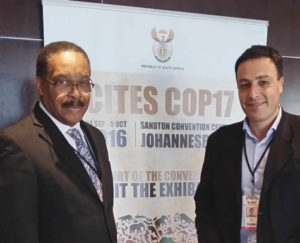 CITES Resolution Conf. 16.8, Frequent cross-border noncommercial movement of musical instruments, was agreed upon at the CITES CoP16 held in Bangkok, Thailand, in 2013. It sets procedures for musical instrument certificates for travelers with instruments containing specimens of species listed by the convention, which allow them to avoid the need to obtain permits for every border crossing. The aim of Resolution Conf. 16.8 was to facilitate more practical and reasonable cross-border movements. In this context, parties believe the regulation should be proportionate to the potential conservation benefits and should provide a simplified procedure for individuals traveling with musical instruments for noncommercial purposes (edited from a CoP17 draft revision of 16.8).

Professional, student, and amateur musicians, and collectors around the world, own, perform, and travel with musical instruments that they regularly use, trade/purchase-sell, import, and export and that contain component plant and animal materials controlled under the CITES international treaty. The US recently promulgated new rules under Section 4(d) of the Endangered Species Act of 1973 that effectively increased African elephant protection by placing a US ban on African elephant ivory trade. This was done in response to an alarming rise in poaching that fueled a growing illegal trade. As a result of our coalition’s work, these regulations, effective July 6, 2016, have  an exemption relating to legally crafted, legally owned musical instruments. Visit “What Can I Do With My Ivory?” at https://www.fws.gov/international/travel-and-trade/ivory-ban-questions-and-answers.html for a comprehensive explanation.

With these and other rules in effect, the US was prepared to enter into negotiations and talks with the 183 nations that came together in Johannesburg to harmonize foreign national policies relating to the treatment of animal and plant species around the world.

Is this something a musician could have accomplished alone? No. The importance of the AFM’s participation in CoP17 cannot be understated, as recognized by AFM International President Ray Hair, International Vice President Bruce Fife, Vice President from Canada Alan Willaert, IEB member Tino Gagliardi, and the rest of the IEB. They worked diligently to support our participation in CoP17. Because of my predecessor Hal Ponder and my own close collaborative work with coalition members, including the American Federation of Violin and Bow Makers, the League of American Orchestras (the League), National Association of Music Merchants (NAMM), Martin Guitars, Taylor Guitars, and Carnegie Hall, on September 2, 2016, the USFWS credentialed the AFM to participate as an observer to CoP17 with speaking rights on the floor. However, only parties registered as signatories to the treaty have voting rights, which for the US is the USFWS.

The AFM and its coalition had three main goals: 1) to make effective changes to CITES Resolution Conf. 16.8 relating to frequent cross-border, noncommercial movements of musical instruments; 2) to work with the USFWS in support of its efforts to foster the US endangered species proposals; and 3) to help US musical instrument manufacturers and makers avoid harmful language that could put the musical instrument trade and musicians in peril.

Through careful preconference meetings and research, observations from CoP17 party floor interventions, presentation of a statement from President Hair at a League side event, direct talks with party delegates, distribution of joint position papers, drafting and redrafting of our own coalition intervention, and participation in drafting during floor deliberations on CoP17 Document 42 introduced by the European Union, the coalition was able to get advancements adopted that successfully amended Resolution Conf. 16.8. Those advancements include, but are not limited to:

Encouraging parties to implement the procedures in Resolution Conf. 16.8 and ensure customs officials are aware of them.

Recognizing that, when individuals travel with legally-acquired musical instruments that are properly owned or loaned by an institution, person, or museum for purposes of performance or competition, the instruments may qualify for personal effects exemptions consistent with Resolution Conf. 13.7 (control of trade in personal and household effects) revised at CoP16.

Special thanks to USFWS Director Dan Ashe, Management Authority Director Craig Hoover, and staff in attendance. We could not have been successful without USFWS support behind the scenes and on the conference floor. And of course, what would an international conference in Africa be without music? So a special thanks to the remarkable dancers and drummers who welcomed us to South Africa at the beginning of the conference.

Over the next three years, the parties will work to implement these changes with an eye toward agreement for the next CoP, scheduled for 2019.