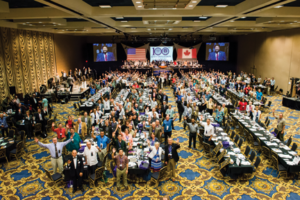 During June, the historic AFM 100th Convention took place at the Westgate Hotel in Las Vegas, Nevada. From pre-convention regional meetings to the swearing in of officers on the final day, the proceedings ran smoothly and were a true demonstration of solidarity.

Among the topics discussed by delegates were recommendations and resolutions for proposed changes to AFM Bylaws to help the AFM better serve the needs of modern musicians. A total of 13 specially focused committees of delegates and AFM staff met to discuss and debate focused topics, concerns, and resolutions relating to law, finance, credentials, measures and benefits, organization and legislation, International Musician, public relations, TEMPO, small locals, election, good & welfare, diversity, and organizing.

Other convention highlights included reports from AFM staff. Director of Organizing & Education/Assistant to the President Paul Frank detailed recent and current organizing campaigns in Seattle, Fort Worth, and Washington, DC. A beautiful memorial service, held on the second day, honored AFM members and staff who have passed away since the last AFM Convention in 2013.

For the most part, “team unity,” led by AFM President Ray Hair remained intact after elections. However, Vince Trombetta stepped down as an International Executive Board member and John Acosta was added. Also, AFM Secretary-Treasurer Sam Folio will be replaced by current AFM Symphonic Services Division Director Jay Blumenthal.

Look for detailed Convention coverage in the August International Musician.