Once every four years, elected delegates to the AFL-CIO Convention gather to elect the AFL-CIO Officers and Executive Council. Our AFM delegation consisted of AFM President Ray Hair, Local 65-699 (Houston, TX) President Lovie Smith-Wright, and myself. Unfortunately, due to a death in her family, Lovie was unable to attend.

AFM members from Local 2-197 (St. Louis, MO) entertained the delegates as they filed into the hall to take their seats before AFL-CIO President Richard Trumka banged his gavel bringing the convention to order. Members of the St. Louis local also played for various receptions throughout the convention.

The use of technology played a prominent role allowing for a paperless convention. An app created for download to mobile devices allowed delegates and attendees to view the agenda, workshops, resolutions, constitutional amendments, governance documents, as well as a personal conference schedule on their cell phones. As an alternative to using their phones, each delegate received a fully loaded tablet at registration to provide access to these documents on a larger screen. Video streaming of convention proceedings was also available online. 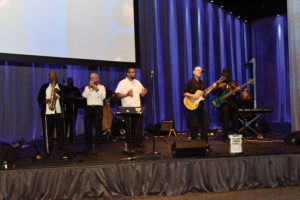 The AFL-CIO Executive Council, consisting of the three top officers (listed above) and 55 vice presidents, ran on an unopposed slate.

Some of the more important resolutions passed:

1) Workers’ Bill of Rights—all working people have the right to:

• A good job with fair wages

• Quality health care: regardless of income, job, or pre-existing conditions

• A safe job: free from harassment and violence

• Freedom from discrimination in: hiring, firing, and promotions

• Freedom to join together with our co-workers for better wages and working conditions, whether in a union or not

• A voice in democracy: to freely exercise our democratic voice through voting and civic participation

4) Inclusion and equity—ensuring equity and inclusion internally and externally

5) Full employment and a $15 minimum wage

6) In support of public education

For a full list of all the resolutions adopted at the 2017 AFL-CIO Convention go to www.aflcio2017.org/adopted-resolutions.