The Hodads: Riding the Waves to Private Parties and Corporate Events

California party band The Hodads takes its name from the slang for a greaser, non-surfer who hangs out in the surfer scene. The group was first launched as a beach party theme band.

“We were a bunch of local musicians working for hire. At the time, there were a lot of casual offices hiring us to put together different groups. We just figured we would put our forces together, do it ourselves, and cut out the middleman,” explains Tony Jones, Hodad drummer. 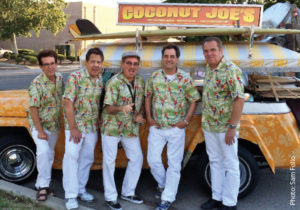 A couple of the band members used to play with The Beach Boys and Jan and Dean, says Jones. “We put that the material together to do beach parties,” says the Local 47 (Los Angeles, CA) member. Upon seeing the potential, the band expanded the concept to all kinds of party themes and styles of music, among them: Blues Brothers; Motown revue, disco ’70s; Margaritaville; ’50s sock hop; psychedelic ’60s; country and western, biker, yacht club, as well as Hollywood themes; and the classic rock show. “We do whatever the party calls for.”

All of The Hodads are vocalists and they take their turns as frontman for the group. Jones is known for vocal impersonations of Louis Armstrong, Elvis Presley, Tony Bennett, Frank Sinatra, and Ray Charles. Also a songwriter, he has performed with Milton Berle, Fred Travelena, Danny Gans, The Drifters, The Coasters, Billy Preston, Patty Andrews, and more. He says that all of The Hodads are vocalists and take their turns as front men for the group.

The multi-talented, highly experienced professional musician line-up also includes Jimmy Street of Local 7 (Orange County, CA), and John Hatton, Bob Schuster, and Sterling Smith of Local 47. Street, who plays sax and guitar, has performed with Frank Sinatra, Jack Jones, The Drifters, The Coasters, and Big Daddy. Other credits include appearances on Live! with Regis and other television variety shows.

Smith, the group’s keyboardist, has recorded and toured with The Beach Boys, Randy Meisner of Local 47, Jan and Dean, Bob Dylan, Lisa Hartman, Barry Manilow, and Terry Reid, as well as Arthur Brown.

Aside from this core group of band members, The Hodads often add other musicians to meet the requests of their clients. “We’ve done everything from being like a pit band backing a CBS affiliate to a 19 or 20-piece party band that plays disco and contemporary music. We add onto it if people want something extra—female singers, horns, and strings,” says Jones.

One thing this band is doing right, is taking advantage of many different avenues for promotion, including their listing on the booking sight AFM Entertainment (www.AFMentertainment.org) and creating their own comprehensive website. The Hodads’ website includes all the information clients may need to book the band: song lists, stage plots, possible configurations, as well as video and audio demos.

Jones says one of their more interesting corporate gigs was a two-month job playing for IBM employees at a beach resort in Cancun. “They had different groups from all over the US that came down for four days,” he recalls. “We played the first day at a beach party and on the fourth day for a formal dinner party inside the Ritz Carlton. People didn’t know we were the same band.”

Another unusual gig was at a Las Vegas product release event for Transitions Adaptive Lenses. “They were announcing a lens called XTRA,” says Jones. “We were to come dressed as the Village People and sing to a track of YMCA [which they also produced]. We did that one song and left.”

A 37-plus year member of Local 47, Jones says, “My relationship with the union is pretty close.” It goes back to his father, also a musician, who was the local’s live-in security guard for a while.

Today, with more people using DJs for their events, Jones says the corporate work has fallen off some. Still, he offers a few tips for up and coming cover bands that want to take on this kind of work. “Be as versatile as you can, and be able to play any style of music and know it well. These days you have to sound exactly like the recording to be authentic,” he says, adding that it’s key to read and adapt to the audience. “We look for audience participation and ‘pressure points’ that get people motivated. If the tempo and song repertoire is to their liking, and they are dancing, we keep the train rolling and don’t change the tempo.”