Educator and entrepreneur Jonathan Haas of Local 802 (New York City) is a world-class musician—percussionist with the American Composers Orchestra, the Aspen Chamber Orchestra, and principal with the American Symphony Orchestra—and he is also a timpani soloist. His contracting company, Gemini Music Productions, a partnership with fellow Local 802 member Neil Balm, is the largest employer of musicians in New York City. As Haas tells it, when he was a young musician he had no idea his career would pan out this way.

“What I thought I would end up doing—playing in a symphony orchestra for the rest of my career—I didn’t end up doing,” says Haas. Though his first job out of college was principal timpanist for the Charlotte Symphony Orchestra, he stayed in that post for only a year, choosing to follow other musical pursuits. 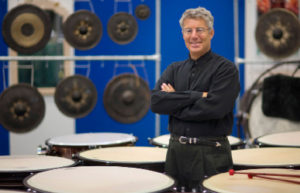 As a professor of music at NYU, Haas encourages his students to remain open to whatever path their careers might take. “If it is apparent that music is what makes them happy, then all the questions like ‘how will I make a living?’ are not germane. They have a calling. That in and of itself is very worthy to explore, whether success presents itself in the way they are expecting, or not,” he explains. “I pretty much tell students they should not expect it to present itself the way they think.”

Haas’s performing career evolved to creating a niche as a solo timpanist after he discovered recordings of 18th century timpani concertos written for eight timpani (one player) and an orchestra. “The timpani played the melody; I thought that was the greatest sound,” he says. Then, Haas learned that one of his “hero” composers, Karlheinz Stockhausen, had written a piece for solo timpani. He wrote Stockhausen and requested the music to perform its US premiere. He set to work rearranging these pieces for a Carnegie Hall debut, which also included an obscure solo timpani piece from Samuel Barber.

Solo timpani was unheard of and the Martha Baird Rockefeller Foundation denied him funding. He borrowed money from his parents to rent the hall. Vindication came after the 1980 performance, when a representative for the foundation, who had attended the show, handed him a check for $3,500 to cover the cost.

Now on a mission, Haas approached composer Philip Glass with the prospect of commissioning a timpani concerto. Though the composer agreed to the idea, the timing didn’t pan out. By the time Haas found five orchestras across the US who would commit to funding it, Glass was busy with a commission for the Metropolitan Opera. It took another 10 years and a second fundraising mission before Glass finally went to work on the concerto that became Concerto Fantasy for Two Timpanists and Orchestra.

Both Glass and Haas were surprised by its overwhelming success. Since its premiere in 2000, Haas has played the piece 75 times, plus he estimates its been performed another 50 to 75 times without him.

Since the Glass commission, Haas has commissioned about 30 pieces from various composers. His current project is a commission with rock drummer Glenn Kotche of Local 10-208 (Chicago, IL)—a concerto for amplified bicycle and orchestra.

Haas’s passion for percussion, is matched by his passion for teaching. He took his first teaching position at the Peabody Conservatory when he was just 27 years old. “My teachers gave me everything; I appreciated that so much,” he says recalling his mentors—Saul Goodman, Rick Holmes, John Kasica, Rich O’Donnell, Tom Stubbs, and side-by-side training with Charlie Owen at the Aspen Music Festival. “The influence of the Aspen Music Festival was very deep. That experience was very motivating,” says Haas who also teaches at Aspen.

Haas says that, in today’s music scene, diversity and expertise on a wide range of instruments are critical. “World music is now in the fabric of music making; everybody has to embrace it,” he says. “A successful musician is a global musician. At NYU, percussion majors are required to achieve mastery in both steel drum and African drum ensembles and cultures.

Beyond talent and skill, Haas says that cooperation is the number one trait he looks for in young musicians. “A young musician has to come with a musical reputation, cooperation, and they have to be a top player,” he says. “You can’t wait until you get out of school. Your reputation is percolating.” He recommends young people go to concerts and make themselves known to the musicians they admire. Meet them and be genuine; if you like what they are doing, tell them. Ask them sincere questions about specific techniques, he advises.

In contracting through Gemini Music Productions, Haas sees one of his missions as helping musicians. “We [Neil and I] are doing contracting in a different way than our predecessors,” says Haas. “We don’t want power and control over people’s lives and destinies. We want to get musicians what they were entitled to and to stick with the rules that were negotiated, and to help managements understand the side of being a musician that they don’t necessarily understand.”

Haas praises the AFM for doing its part. “Union membership is essential because we are all in this together,” says Haas. “One voice isn’t strong enough. Music has a lot of single leaders in it—the conductor, the artistic director—making decisions. Back in the days before the union, they abused their influence and power. The union is there most of the time for protection of musicians and their music making, but it also advances wages, healthcare, and pension.”

Putting aside all of his commissions and concerts, Haas says he is gratified by the young people he’s worked with. “I’m most proud of being able to identify in a young person, the things that I felt myself when I was young, and to encourage them. There’s nothing more satisfying than sitting in the audience, hearing one of your students, and kwing that you had something to do with encouraging them.”